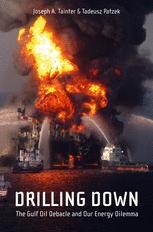 The Gulf Oil Debacle and Our Energy Dilemma

For more than a century, oil has been the engine of growth for a society that delivers an unprecedented standard of living to many. We now take for granted that economic growth is good, necessary, and even inevitable, but also feel a sense of unease about the simultaneous growth of complexity in the processes and institutions that generate and manage that growth. As societies grow more complex through the bounty of cheap energy, they also confront problems that seem to increase in number and severity. In this era of fossil fuels, cheap energy and increasing complexity have been in a mutually-reinforcing spiral. The more energy we have and the more problems our societies confront, the more we grow complex and require still more energy. How did our demand for energy, our technological prowess, the resulting need for complex problem solving, and the end of easy oil conspire to make the Deepwater Horizon oil spill increasingly likely, if not inevitable? This book explains the real causal factors leading up to the worst environmental catastrophe in U.S. history, a disaster from which it will take decades to recover.

Joseph A. Tainter is Professor of Sustainability in the Department of Environment and Society, Utah State University, having previously served as Department Head. He received his Ph.D. in Anthropology from Northwestern University in 1975. Dr. Tainter worked on issues of sustainability before the term became common, including his highly-acclaimed book The Collapse of Complex Societies (Cambridge University Press, 1988). He is co-editor of The Way the Wind Blows: Climate, History, and Human Action (Columbia University Press, 2000), a work exploring past human responses to climate change. With T. F. H. Allen and Thomas Hoekstra he wrote Supply-Side Sustainability (Columbia University Press, 2003), the first comprehensive approach to sustainability to integrate ecological and social science. Dr. Tainter has taught at the University of New Mexico and Arizona State University. Until 2005 he directed the Cultural Heritage Research Project in Rocky Mountain Research Station. Dr. Tainter’s sustainability research has been used in more than 40 countries, and in many scientific and applied fields. Among other institutions, his work has been consulted in the United Nations Environment Programme, UNESCO, the World Bank, the Rand Corporation, the International Institute for Applied Systems Analysis, the Beijer Institute of Ecological Economics, the Earth Policy Institute, and the Technology Transfer Institute/Vanguard. Dr. Tainter has been invited to present his research at the Getty Research Center, the University of Paris (Panthéon-Sorbonne), the Royal Swedish Academy of Sciences, and many other venues. His research has been applied in numerous fields, including economic development, energy, environmental conservation, health care, information technology, urban studies, and the challenges of security in response to terrorism. He appears in the film The 11th Hour, produced by Leonardo DiCaprio, Leila Conners Petersen, Brian Gerber, and Chuck Castleberry, and in the ABC News special Earth 2100. His biography has been included in Who’s Who in the World, Who’s Who in America, and Who’s Who in Science and Engineering. Dr. Tainter’s current research focuses on sustainability, energy, and innovation.

Tad Patzek is the Lois K. and Richard D. Folger Leadership Professor and Chairman of the Petroleum and Geosystems Engineering Department at The University of Texas at Austin. He also holds the Cockrell Regents Chair #11. Between 1990 and 2008, he was a Professor of Geoengineering at the University of California, Berkeley. Prior to joining Berkeley, he was a researcher at Shell Development, a unique research company managed for 20 years by M. King Hubbert of the Hubbert peaks. Patzek’s current research involves mathematical and numerical modeling of earth systems with emphasis on fluid flow in the subsurface soils and rocks. He works on the thermodynamics and ecology of human survival, especially on the global food and energy supply systems. More recently, Patzek has engaged in the studies of complex systems, focusing on the ultra deepwater offshore operations. He briefed Congress on the BP Deepwater Horizon well disaster in the Gulf, and was a frequent guest on NPR, ABC, BBC, CNN, and CBS programs. For the last two years, Patzek’s research has emphasized the use of unconventional natural gas as a fuel bridge to the possible new energy supply schemes for the U.S. He appeared in the Haynesville Shale documentary. Currently, Patzek teaches courses in petroleum engineering, hydrology, ecology and energy supply, computer science, and mathematical modeling of earth systems. Patzek is a coauthor of over 200 papers and reports, and is writing five books. In March 2011, he was chosen by US Interior Secretary Ken Salazar to serve on the Ocean Energy Safety Advisory Committee, a permanent advisory body providing critical guidance on improving offshore drilling safety, well containment, and spill response offshore.

“Tainter and Patzek use the story of Gulf oil spill as the background for discussing the energy-complexity spiral, and its relationship to this accident. … Drilling Down touches on many interesting topics, from details about how extraction is done … to overviews of how various civilizations have dealt with rising complexity and reduced energy flows. … The book is well worth … . With one detail-oriented author, and one ‘big picture’ author, the book includes something for everyone.” (Gail Tverberg, Financial Sense, September, 2011)