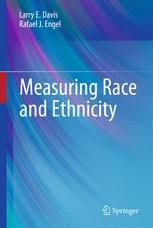 Racial and ethnic issues stand at the core of social, political, and economic concerns in an increasingly diverse America. Accordingly, how individuals from the various ethnic groups regard themselves—and others—is a salient focus of research studies across the disciplines. Measuring Race and Ethnicity gathers psychological measures of common phenomena such as racial identity, acculturation, and intra- and intergroup relations enabling researchers to compare concepts across groups and better evaluate differences and disparities.

Most of the instruments date from the 1990s and later, while a number of still-useful earlier scales are included. Taken together, these tools strengthen a wide evidence base, and point to areas where new scales are warranted. Included in this volume:

-Fourteen measures for African Americans, such as the Rejection Sensitivity Race Questionnaire and the Cultural Mistrust Inventory -Nine Caucasian-specific instruments, including the Race and Politics Survey and the Being White in America Scale -Nineteen acculturation scales for Latinos, some specific to Puerto Ricans, Cubans, and Chicanos -Eight Asian/Pacific Islander measures, including the Race-Related Stressor Scale and the Intergenerational Congruence in Immigrant Families Scale. -The Native American Acculturation Scale -Twenty-two generic measures, including the Experience of Discrimination Scale and the Scale of Ethnocultural Empathy

Researchers in psychology, social work, and public health examining cultural and race-related topics will find an immediately relevant source of valid and reliable scales in Measuring Race and Ethnicity.

Dr. Larry E. Davis is Dean of the School of Social Work at the University of Pittsburgh, where he is the Donald M. Henderson Professor and Director of the Center on Race and Social Problems. Dr. Davis came to the University of Pittsburgh in the fall of 2001. He had been a faculty member at the George Warren Brown School of Social Work at Washington University in St. Louis, Missouri since 1977, where he was a Professor of Social Work and Psychology and the holder of the E. Desmond Lee Chair in Ethnic and Racial Diversity. Dr. Davis received his PhD from the University of Michigan’s dual-degree program in social work and psychology in 1977. He holds a bachelor’s degree in psychology from Michigan State University and a Master's in social work and a Master's in psychology from the University of Michigan. His professional interests include interracial group dynamics, the impact of race, gender, and class on interpersonal interactions, African American family formation, and youth. He has received research funding from sources such as the National Science Foundation, the National Institute of Health, and National Institute of Mental Health. Dr. Davis is the recipient of the Chancellor's 2007 Affirmative Action Award.

Dr. Rafael Engel is an Associate Professor of social work at the University of Pittsburgh. Dr. Engel's substantive interests are in gerontology and economic well-being and the implications of welfare reform. His most recent work in aging has focused on evaluating programmatic outcomes for vision impaired elderly. Dr. Engel is currently involved in a time-activity study with Children and Youth Services and is collaborating in a multi-university study of best practices in faith-based organizations. He teaches history, policy and research and evaluation courses across the three degree programs.

“The inspiration for Measuring Race and Ethnicity was Robinson and Shaver’s (1969) classic text, which entailed a collection of social­­–psychological scales categorized into the major areas of social psychology (e.g., attitudes, values, interpersonal relationships). … Measuring Race and Ethnicity is essentially an almanac of racial and ethnic measures. … the volume, breadth, and level of detail provided for scales across multiple ethnic groups still make this a very useful resource for researchers interested in the measurement of ethnicity and race-related phenomena.” (Richard D. Harvey and Cathryn D. Blue, PsycCRITIQUES, Vol. 56 (17), April, 2011)