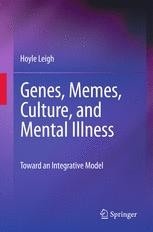 Toward an Integrative Model

Genes, Memes, Culture, and Mental Illness: Toward an Integrative Model

What produces mental illness: genes, environment, both, neither? The question has been asked in various forms, and answers debated, for many centuries. According to a groundbreaking new book, the answer can be found in memes—replicable units of information linking genes and environment in the memory and in culture—whose effects on individual brain development can be benign or toxic.

The latest work from pioneering psychiatrist Hoyle Leigh, Genes, Memes, Culture, and Mental Illness reconceptualizes mental disorders as products of stressful gene x meme interactions, and introduces a biopsychosocial template for meme-based diagnosis and treatment. A range of therapeutic modalities, both broad-spectrum (e.g., meditation) and specific (e.g., cognitive-behavioral), for countering negative memes and their replication are considered, as are possibilities for memetic prevention strategies. With characteristic depth and accessibility, the author:

For psychiatrists, psychologists, sociologists, physicians, medical students, and graduate students interested in culture and mental health and illness, Genes, Memes, Culture, and Mental Illness will enhance their theoretical knowledge and daily practice as well as stimulate new discussion on some of the most enduring issues in their fields.

Hoyle Leigh, M.D. is currently Professor of Psychiatry at University of California, San Francisco, and Director of the Psychosomatic Medicine and Psychiatric Consultation-Liaison Program at Fresno Community Regional Medical Center in Fresno, California. He is the author of many professional books and journal articles, including the textbooks, Handbook of Consultation-Liaison Psychiatry, with Jon Streltzer, M.D., and The Patient: Biological, Psychological, and Social Dimensions of Medical Practice, 3rd Edition, with Morton F. Reiser, M.D. and Biopsychosocial Approaches in Primary Care. Prior to joining the faculty at UCSF, Dr. Leigh was Professor of Psychiatry at Yale University School of Medicine, where he founded the pioneering Yale Behavioral Medicine Clinic with Gary Schwartz, Ph.D., as well as directing the basic behavioral science course and the Psychiatric Consultation-Liaison Service at Yale New Haven Hospital. Dr. Leigh received his M.D. degree summa cum laude from Yonsei University School of Medicine in Korea, and completed residency training in psychiatry at University of Kansas Medical Center and the Montefiore Medical Center in New York.