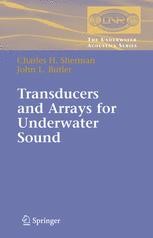 Transducers and Arrays for Underwater Sound

This book is concerned with the theory, development and design of electroacoustic transducers for underwater applications, and is more comprehensive than any existing book in this field. It includes the basics of the six major types of electroacoustic transducers, with emphasis on the piezoelectric ceramic transducers that are currently most widely used. It presents the basic acoustics, as well as specific acoustic data, needed in transducer design and includes analysis of nonlinear effects in transducers. A large number of specific transducer designs, including both projectors and hydrophones, are described in detail as well as methods of modeling, evaluation and measurement. Analysis of transducer arrays, including the effects of mutual radiation impedance, as well as numerical models for transducers and arrays are also covered. The book contains an extensive Appendix of useful current information, including data on the latest transduction materials, and numerous diagrams that will facilitate its use by students and practicing engineers and scientists.

Dr. Charles H. Sherman received the B. S. degree from the Massachusetts Institute of Technology and the M. S. and Ph. D degrees from the University of Connecticut. He worked mainly at the Navy Underwater Sound Laboratory in New London, CT, but also at Tracerlab, Inc. in Boston, MA, and Parke Mathematical Laboratories in Carlisle, MA, and now works at Image Acoustics, Inc. He has presented and published over thirty papers related to acoustics and transducers, and was elected Fellow of the Acoustical Society of America in 1974. He taught advanced acoustics at the University of Connecticut and transducers in the Ocean Engineering Department of the University of Rhode Island. He has over 40 years experience in underwater sound transducers and arrays.

Dr. John L. Butler is President and Chief Scientist at Image Acoustics, Inc. and has had over thirty five years of both practical and theoretical experience in the design and analysis of underwater sound transducers and arrays. He has worked for Harris Transducer (now Harris Acoustic Products Corporation), Parke Mathematical Laboratories, Massa Products Corporation and Raytheon Company, consulted to a number of underwater acoustics firms and the U. S. Navy, taught courses in acoustics, holds seventeen patents on transducers and has presented or published over thirty papers on electroacoustic transducers. In 1977 he was elected Fellow of the Acoustical Society of America. His education includes: Ph. D., Northeastern University, Boston, MA, and Sc. M., Brown University, Providence, RI.