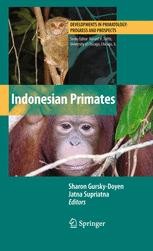 Edited by two internationally renowned primatologists, this new text synthesizes current research on the primates of Indonesia, which include apes, monkeys, and prosimians. It is published at a crucial time as anxiety over the fate of the Indonesian primate population is rising. One study concluded that more than 70% of Asian primate species are threatened with extinction, while 84% of the dozens of Indonesian primate species are threatened. In this volume, the common thread of diversity is inextricably linked to the theme of conservation.

Contributed by key researchers from around the world, the volume’s chapters demonstrate the sheer variety in Indonesian primates, ranging from Nekaris and Munds’ study of using slow loris facial variation to distinguish species to Delgado’s discussion of communication patterns among orangutans. The book’s first section contains chapters on the endangered orangutans and gibbons. The orangutan, in its Sumatran and Bornean forms, is the only Asian great ape; yet in Borneo, Sugardito and Adhikerana nest densities are severely threatened by logging activity, especially at national park boundaries. The authors highlight the effectiveness of community-based patrolling as a protective measure is becoming an increasingly effective means of protecting orangutans. The second section of the text examines the diversity of monkeys in Indonesia, with each author in turn stressing the importance of conservation. Yorzinski uses the critically endangered pig-tailed langur of the Indonesian Mentawai Islands to demonstrate how isolated island primates react to predation pressure, while further chapters explore the relationship between vegetation and primate densities, habitat quality and its degradation, and human--simian interaction. A further section looks at the region’s prosimians and notes that the taxonomic diversity is only recently being explored. The cryptic/nocturnal nature of these primates makes their conservation status even more uncertain.

Sharon Gursky-Doyen is an associate professor of anthropology at Texas A&M University. She received her BA from Hartwick College, her MS from the University of New Mexico, and her Ph.D. from the State University of New York at Stony Brook. She has been studying Sulawesi tarsiers since 1994. Her present research is centered on understanding the effects of altitude on the recently re-discovered pygmy tarsiers. She is the author of numerous scientific publications including The Spectral Tarsier, (Prentice Hall 2007); Primate Anti-Predator Strategies (coedited with Anna Nekaris, Springer 2007) as well as Tarsiers: Past, Present and Future (co-edited with Patricia Wright and Elwyn Simons, Rutgers University Press, 2003).

Jatna Supriatna received his B.S. in Biology from Universitas Nasional, Jakarta, and his M.S. and Ph.D. from the University of New Mexico. He has worked for Conservation International since 1994 and has served as the Vice President for Conservation International Indonesia Program since 2005. In 1999, he received the Golden Ark Award for his conservation work from Prince Bernhard of the Netherlands. In 2009, he received a Science Award also known as the Habibie Award from former Indonesian President B.J. Habibie. He has published 8 books on Indonesian Biodiversity and more than 90 articles in international journals. His books include: Panduan Lapangan Primata Indonesia (Field Guide of Indonesia Primates), Conservation Biology and Saving Indonesia's Nature. The latter two books are among the best-selling environment books in Indonesia.

“In this volume, primatologists Gursky-Doyen and Supriatna assemble discussions about ongoing research conducted by an international community of scholars. Studies include the social behavior, ecology, and, in particular, conservation of these often-endangered relatives of humans. … Summing Up: Recommended. Upper-division undergraduates through researchers/faculty.” (E. Delson, Choice, Vol. 48 (1), September, 2010)

“If you are in the market for a book on Indonesian primates, there is no doubt that you could not do better than this handsome volume. … It will inevitably be purchased by, and for, libraries for reference, and it will date quickly. If you need this book for your PhD or dissertation, you will buy it.” (Jennie Robinson, The Biologist, Vol. 57 (4), December, 2010)