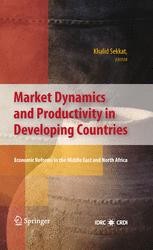 Economic Reforms in the Middle East and North Africa

To what degree are trade liberalization, productivity, and economic growth correlated? Can economic policies designed to encourage competition and curtail industry protection result in large-scale improvements, such as increased innovation and reduced unemployment?

After 20 years of economic reform in the Middle East and North Africa (MENA),  economic performance is still lagging behind many regions of the world. Even in those countries that are the most advanced in implementing reforms, including Egypt, Jordan, Morocco and Tunisia, industries with low productivity growth and high market power continue to dominate. Moreover, the termination of the Multi-Fiber Agreement and the negotiations concerning further liberalization of trade in agricultural products (under the framework of the World Trade Organization) put these and other countries under pressure of fierce competition from emerging nations.

Recent empirical evidence on the impact of reforms in a number of developing countries shows that such persistence of inefficiency and market power is specific to MENA. Showcasing in-depth analyses from Jordan, Morocco, Tunisia, and Turkey (with comparative data from Asia and Latin America), this book focuses on the dynamics of firm entry and exit to help explain the low productivity of the region. The results suggest a number of policy recommendations designed to foster competition, which, in turn, would contribute to innovation, productivity growth, and improved return on capital investments. The book not only reveals important correlations among policy and market factors in MENA, but suggests fruitful areas of research in other developing regions of the world.