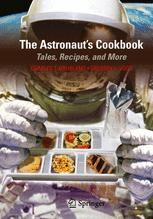 Ever wanted to know what the astronauts eat when they’re in space? Now, you can do better than that! You can actually make what they eat in your own kitchen! And while you’re waiting for your delicious (hah!) space food to cook, you can read about the history of the space program, space food preparation methods, and even get to know many of the astronauts that have dined in space. Did they find the food appetizing? What did they miss most when they were in space? How did NASA try to improve the food over the years?

Charles Bourland is a retired long-time director of the NASA space food program, and Gregory Vogt, also a former NASA education specialist, helped train the astronauts. Both veterans of the U.S. space program have combined here to provide authentic recipes not only of foods that were actually served during various space missions (including Skylab, Apollo, the space shuttle, and the International Space Station) but also some of the astronauts’ favorite recipes and even space recipes from famous TV chefs Rachael Ray and Emeril Lagasse!

You will be amused and amazed at the information you find here. And you will be ready to impress your friends and family with your new culinary skills. Finally, you will have a much better understanding of what it really is to live in space, for weeks or even months at a time. Any volunteers for a trip to Mars? If you are a food lover, maybe not after you read this book and serve up some of its culinary treats…

"Charles Bourland … has co-authored a book describing how food in space has developed through the years. The book, ‘The Astronaut’s Cookbook: Tales, Recipes, and More’ was released on Oct. 27 … . Bourland explained that in the book, he and co-author Gregory Vogt … discuss the history of the space program, space food preparation methods, diet information and space-food facts. … the book gives readers a better understanding of what it really is to live in space, for weeks and months at a time." (St. Clair County Courier, October, 2009)

"If you want to eat like an astronaut, look to ‘The Astronaut’s Cookbook – Tales, Recipes and More,’ where NASA veterans Charles Bourland and Gregory Vogt give a new behind-the-scenes look at dining in outer space. … Emeril Lagasse and Rachael Ray contributed recipes to NASA that are featured in ‘The Astronaut’s Cookbook,’ … . Recipes from astronauts are provided as well." (Charles Q. Choi, Space, November, 2009)

"Cook book … will tell you everything you wanted to know about cooking and eating in space. The Astronaut’s Cookbook - Tales, Recipes, and More - penned by NASA veterans Charles Bourland and Gregory Vogt offers up a number of recipes as well a history of space feasting … for Thanksgiving, if you are so inclined. The book includes a number of interesting space food facts … . The book includes astronaut home favorite recipes and NASA quarantine food recipes." (Michael Cooney, Computerworld, November, 2009)

“You’ll find it here in this delightful book that gives you an insider’s look at space food. … introduces you to a variety of space food types, from rehydrated food, condiments, as well as natural form foods. You’ll even find a nicely written section on eating in microgravity. … you’ll also find tempting recipes to whip up your own space fare. … you’ll find helpful a helpful list that details internet resources on space food and nutrition. All in all - truly delectable reading!” (Space Coalition Blog, December, 2009)

“My husband and I … had some great laughs at the tales of astronauts past. Recipes are great and the insider knowledge of the program is wonderful. This is a must read for anyone interested in the space program from Apollo to ISS. … the book rings true from beginning to end. George and I think it is a unique and insightful.” (Millie Hughes-Fulford, Amazon, December, 2009)

“Charles Bourland, a retired NASA food scientist, and co-author Gregory Vogt explain in The Astronaut’s Cookbook, bread means crumbs, and in zero-g they become air pollution - not just messy, but inhaled into astronauts’ lungs. Tortillas … have largely replaced bread in space. … This book is larded with dozens of recipes for space food … . Enjoy it for the engineering and the anecdotes … .” (New Scientist, January, 2010)

“The Astronaut’s Cookbook - Tales, Recipes, and More … gives a first look at what astronauts eat while being in space. … gives readers instructions and recipes on how they can cook their own space food. … Besides, celebrity chefs … their recipes are featured in the book, including Rachael Ray’s 5-Vegetable Fried Rice with 5-Spice Pork. … Charles Bourland’s extensive experience … gives a behind-the-scenes look. Anecdotes throughout the book share unique stories … including one astronaut’s quest to eat Georgia BBQ in space.” (Thaindian News, November, 2009)

“Thanks to The Astronaut’s Cookbook, just about everyone can eat like one. … this book is fantastic. It contains dozens of actual space-food recipes from the Apollo era to the present day … . Many of the recipes come with photos and instructions on how to prepare them at home … . Between recipes, the book is packed full of everything you ever wanted to know about eating in space … . Vignettes like these are a joy for space fans and Earth-bound experimenters alike.” (Physics World, January, 2010)

“Cooking from The Astronaut’s Cookbook takes it one step further by letting you join astronomy, history and more. … The book is excellent for parents … . I really encourage your household to invest in this cookbook especially if you are space fanatics! You will really like it. If you are an educator, I think you will find plenty of source material in here for class projects, activities, etc. and plenty of recipes you can cook for yourself at home. … it’s a good investment.” (Kristine Leuze, Wallflower Wonderland, February, 2010)

“This book is called a cookbook … . it provides great detail on the issues regarding food selection, most of the book consists of actual proven recipes. … this book has interesting facts, entertaining recipes and the potential for the beginnings of a wonderful evening. … ‘The Astronaut’s Cookbook – Tales, Recipes, and More’, by Charles Bourland and Gregory Vogt lets you sample the same food that they do and could also prepare you for the long voyage away from readily running water and fresh air.” (Universe Today, January, 2010)

“Charles Bourland has just retired from his job as NASA’s ‘director of space foods’, and Gregory Vogt was an astronaut trainer. They have provided us with a fascinating insight into the job of the space dietician and nutritionist, as well as a wondrous collection of recipes for the meals that were served on Skylab, Apollo, the space shuttle and the International Space Station. … This an intriguing book, well written, and colourfully reproduced with a host of appetising pictures.” (David W. Hughes, Astronomy Now, July, 2010)

“There are plenty of recipes created by NASA and even a few recipes developed and contributed by American celebrity chefs like Emeril Lagasse and Rachel Ray. … This is the book to have on your launch pad for increasing your knowledge of space food, including where the astronauts go after they have had their space meals … . Ultimately though, we should be enjoying The Astronaut’s Cookbook because like Space, it is there to be explored.” (Gretchen, Culinaria Libris, October, 2010)