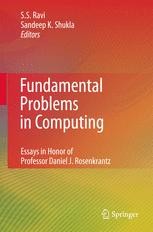 Professor Christopher L. Barrett (Virginia Tech, Blacksburg, VA): “Professor Rosenkrantz has produced numerous seminal results in formal languages, algorithmic complexity and databases over the course of his career. From his 1967 context-free grammars paper to his recent work on dynamical systems, he has provided the computer science community with a wonderful collection of results which are of theoretical and practical importance. This book is a very appropriate attempt by the community to honor his vision and thank him."

Professor Zvi Kedem (New York University, New York, NY): “Many of Dan’s publications have informed and inspired research in several areas of Computer Science. My own work on concurrency control was influenced by his seminal contributions to that area. This volume, containing a number of Dan’s best papers and contributed chapters by well-known researchers, is a fitting tribute to a truly distinguished researcher."

Professor Jeffrey Ullman (Stanford University, Stanford, CA): “I have known Dan since the year before we entered Columbia Engineering School as freshmen. His work has been a model for how one uses theoretical skills to make an impact on real problems, and I wish him well in his retirement."

Professor Moshe Vardi (Rice University, Houston, TX): “Dan Rosenkrantz’s career spans over 40 years of designing and analyzing algorithms. Unlike many other algorithms researchers, Dan has always sought algorithms in their native application domains, in compilers, in concurrency control, in network design, in query evaluation, and in many more areas. We learn from him that algorithm design and analysis is one of the most fundamental activities in computer science."