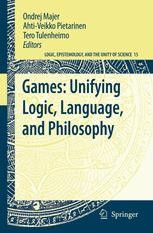 OndrejMajer,Ahti-VeikkoPietarinen,andTeroTulenheimo 1 Games and logic in philosophy Recent years have witnessed a growing interest in the unifying methodo- gies over what have been perceived as pretty disparate logical ‘systems’, or else merely an assortment of formal and mathematical ‘approaches’ to phi- sophical inquiry. This development has largely been fueled by an increasing dissatisfaction to what has earlier been taken to be a straightforward outcome of ‘logical pluralism’ or ‘methodological diversity’. These phrases appear to re ect the everyday chaos of our academic pursuits rather than any genuine attempt to clarify the general principles underlying the miscellaneous ways in which logic appears to us. But the situation is changing. Unity among plurality is emerging in c- temporary studies in logical philosophy and neighbouring disciplines. This is a necessary follow-up to the intensive research into the intricacies of logical systems and methodologies performed over the recent years. The present book suggests one such peculiar but very unrestrained meth- ological perspective over the eld of logic and its applications in mathematics, language or computation: games. An allegory for opposition, cooperation and coordination, games are also concrete objects of formal study.

Ondrej Majer is a researcher at the Institute of Philosophy, Academy of Sciences of the Czech Republic, Prague. He defended a PhD in logic at the Institute of Philosophy in Prague, and a master's degree in computer science at the Faculty of Mathematics and Physics, Charles University, Prague. His scientific interests include logic and games, logic and probability, many valued logics, and epistemic logics.

Ahti-Veikko Pietarinen is University Lecturer and Adjunct Professor in Theoretical Philosophy, in the Department of Philosophy at the University of Helsinki, Finland. He received a PhD in philosophy in 2002 and a master’s degree in computer science in 1997. He is author of Signs of Logic: Peircean Themes on the Philosophy of Language, Games, and Communication (Springer, 2006), and editor of Game Theory and Linguistic Meaning (Elsevier, 2007). Dr. Pietarinen’s research involves philosophy of logic and mathematics, philosophy of language, game theory, pragmatism, and semiotics.

Tero Tulenheimo works as a researcher at the Department of Philosophy, University of Helsinki, Finland. He defended his PhD thesis on independence friendly modal logic in January 2004 in Helsinki. Dr. Tulenheimo is specialized in logic, philosophy of logic, and the interface of games and logic. He has had longer and shorter stays in foreign universities in France (Lille, Nancy), The Netherlands (Amsterdam) and UK (Cambridge).