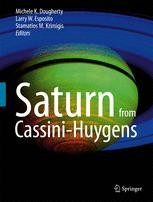 This book reviews our current knowledge of Saturn featuring the latest results obtained by the Cassini-Huygens mission. A global author team addresses the planet’s origin and evolution, internal structure, composition and chemistry, the atmosphere and ionosphere, the magnetosphere, as well as its ring system. Furthermore, Saturn's icy satellites are discussed. The book closes with an outlook beyond the Cassini-Huygens mission. Colorfully illustrated, this book will serve as a reference to researchers as well as an introduction for students.

Dr. Esposito the principal investigator of the Ultraviolet Imaging Spectrograph (UVIS) experiment on the Cassini space mission to Saturn. He was chair of the Voyager Rings Working Group. As a member of the Pioneer Saturn imaging team, he discovered Saturn’s F ring. He has been a participant in numerous US, Russian and European space missions and used the Hubble Space Telescope for its first observations of the planet Venus. He was awarded the Harold C. Urey Prize from the American Astronomical Society, The NASA Medal for Exceptional Scientific Achievement, and the Richtmyer Lecture Award from the American Association of Physics Teachers and the American Physical Society.

Dr. Esposito has written his Ph.D dissertation, numerous scientific publications, scholarly reviews on the topic of planetary rings as well as the Cambridge University Press book Planetary Rings. Along with his students and colleagues he continues to actively research the nature and history of planetary rings at the University of Colorado, where he has been since 1977. He is now Professor of Astrophysical and Planetary Sciences and a member of the Laboratory for Atmospheric and Space Physics (LASP).

Dr. Stamatios (Tom) Krimigis has been at APL since 1968, after earning his B. Physics from the University of Minnesota (1961), and his M.S. (1963) and Ph.D. (1965) in Physics from the University of Iowa and serving as Assistant Professor of Physics and Astronomy there. He became Supervisor of Space Physics and Instrumentation in the Space Department, Chief Scientist in 1980, Department Head in 1991, and Emeritus Head in 2004. He is Principal Investigator on several NASA spacecraft, including Voyagers 1 and 2 to the Outer Planets and the Voyager Interstellar Mission, and the Cassini mission to Saturn and Titan. He has designed and built instruments that have flown to seven of the nine planets, and hopes to complete the set with his participation in the MESSENGER mission to Mercury and New Horizons mission to Pluto. He has published more than 370 papers in journals and books on the physics of the sun, interplanetary medium, planetary magnetospheres, and the heliosphere. He is recipient of NASA's Exceptional Scientific Achievement Medal twice, is a Fellow of the American Physical Society, American Geophysical Union, and American Association for the Advancement of Science, recipient of COSPAR's Space Science Award in 2002, a recipient of the Basic Sciences Award of the International Academy of Astronautics where he serves on the Board of Trustees, and was elected recently to the newly established chair of "Science of Space" of the Academy of Athens.

From the reviews: “In Saturn from Cassini-Huygens, editors Dougherty (Imperial College, UK), Esposito (Univ. of Colorado), and Krimigis (Johns Hopkins) present a comprehensive volume that summarizes for Saturn, its ring system, and most of its moons the data obtained and the analysis done to date from this four-year mission. … This volume provides an advanced student or practicing researcher an excellent overview of the current state of understanding of Saturn, its rings, and many of its moons. Summing Up: Highly recommended. Upper-division undergraduates and above.” (C. Palma, Choice, Vol. 47 (10), June, 2010)