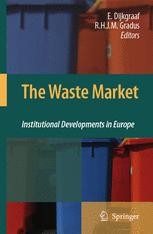 Since 1960, the importance of the waste sector has increased substantially in many EU countries from an economic and environmental viewpoint, yet not much literature is readily available on the topic. Key questions answered in this book are whether the use of market oriented methods and organization forms can diminish the increasing costs and stimulate waste reduction and sorting.

The Waste Market undertakes the interesting task of examining the creative ways in which a handful of European countries, namely Belgium, the Netherlands, Norway, Spain, and Sweden, have managed their waste collection market. For instance, the Netherlands experimented a lot with competition and different types of ownership. It shows that competition is more important than ownership. The use of public firms, exceptional in other European countries, seems to be a powerful instrument to enhance competition. The lack of these firms might explain why private production is not always cheaper than own collection by municipalities in Sweden. Instead of public firms, cooperation is much more used in Spain and Norway to exploit economies of scale.

This insightful work also discusses variable charging that motivates customers to reduce waste. Different forms of variable charging are becoming more widespread in Belgium and the Netherlands and are very effective in reducing the amount of waste and help motivate customers to recycle their waste better. In the Netherlands different systems based on weight, bag, volume or frequency are used, which differ in effectiveness and implementation costs. The Flemish experience shows that variable charging can be even more effective, if it is combined with other policy instruments.

"This specialized work on the topic of solid waste collection management in five European countries consists of eight substantive chapters: four on Holland and one each on Sweden, Norway, Spain, and Belgium. … for those concerned with the efficiency of municipal operations … this work, edited by academicians from the Netherlands, is a valuable resource containing much food for thought. Summing Up: Recommended. Comprehensive graduate, research, and professional collections." (J. Prager, Choice, Vol. 46 (11), July, 2009)