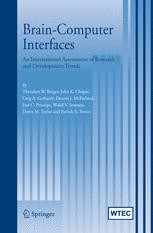 An international assessment of research and development trends

Brain-computer interface (BCI) research deals with establishing communication pathways between the brain and external devices where such pathways do not otherwise exist. Throughout the world, such research is surprisingly extensive and expanding. BCI research is rapidly approaching a level of first-generation medical practice for use by individuals whose neural pathways are damaged, and use of BCI technologies is accelerating rapidly in nonmedical arenas of commerce as well, particularly in the gaming, automotive, and robotics industries. The technologies used for BCI purposes are cutting-edge, enabling, and synergistic in many interrelated arenas, including signal processing, neural tissue engineering, multiscale modeling, systems integration, and robotics.

This WTEC study gathered information on worldwide status and trends in BCI research to disseminate to government decisionmakers and the research community. The study reviewed and assessed the state of the art in sensor technology, the biotic-abiotic interface and biocompatibility, data analysis and modeling, hardware implementation, systems engineering, functional electrical stimulation, noninvasive communication systems, and cognitive and emotional neuroprostheses in academic research and industry. The study also compared the distinctly different foci, range, and investment levels of BCI research programs in the United States, Canada, China, Europe, and Japan.

While at USC, Dr. Berger has received an NIMH Senior Scientist Award, was elected a Fellow of the American Institute for Medical and Biological Engineering in 1998, received a Person of the Year "Impact Award" by the AARP in 2004 for his work on neural prostheses, was a National Academy of Sciences International Scientist Lecturer in 2003, and an IEEE Distinguished Lecturer in 2004–2005. Dr. Berger was elected a Senior Member of the IEEE in 2005, and received a "Great Minds, Great Ideas" award from the EE Times in the same year. Dr. Berger is currently chair of an NIH study section that evaluates grants related to clinical neurophysiological, medical devices, and neural prosthetics. Dr. Berger became Director of the Center for Neural Engineering in 1997, an organization that helps to unite USC faculty with cross-disciplinary interests in neuroscience, engineering, and medicine. He has published over 200 journal articles and book chapters, and is the coeditor of a book recently published by the MIT Press: Toward Replacement Parts for the Brain: Implantable Biomimetic Electronics as Neural Prostheses.

Dr. Berger’s research focuses on electrophysiological and theoretical studies of hippocampal neurons and circuits for the purpose of developing neural prostheses and biological-based pattern recognizers.

"Brain–Computer Interfaces is an interesting and unique book … . The authors attempt not only to review the most important aspects of BCIs but also discuss future trends in BCIs and give an overview of the research of many leading laboratories in North America, Europe, Japan, and China. … Overall, this easy-to-follow book is written in a concise and reader-friendly style. I recommend this book to all researchers and students who have an interest in research related to BCIs." (Andrzej Cichocki, The Lancet, Vol. 8, September, 2009)