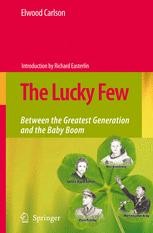 Between the Greatest Generation and the Baby Boom

Born during the Great Depression and World War Two (1929 – 1945) - between the Greatest Generation and the Baby Boom - an entire generation has slipped between the cracks of history. Yet behind the scenes, these Lucky Few became the first American generation smaller than the one before them, and the luckiest generation of Americans ever. As children they experienced the most stable intact parental families in the nation’s history. Lucky Few women married earlier than any other generation of the century and helped give birth to the Baby Boom, yet also gained in education compared to earlier generations. Lucky Few men made the greatest gains of the century in schooling, earned veterans benefits like the Greatest Generation but served mostly in peacetime with only a fraction of the casualties, came closest to full employment, and spearheaded the trend toward earlier retirement. More than any other generation, Lucky Few men advanced into professional and white-collar jobs while Lucky Few women concentrated in the clerical "pink-collar ghetto." Even in retirement and old age the Lucky Few remain in the right place at the right time. Here is their story, and the story of how they have affected other recent generations of Americans before and since.

"Carlson’s work provides an examination of a previously neglected generation while at the same time teaching us how important generational location in general is in determining life chances. It will be a treasured work for the scholars in this area". Steve H. Murdock, Director, U.S. Census Bureau

"The richly documented account of the varying fates of American generations, based chiefly on IPUMS data, provides a fresh perspective on the history of the United States in the twentieth century. This book will become a classic of historical sociology". Steven Ruggles, Director, IPUMS Project

"As a member of the Lucky Few generation, I salute Woody Carlson's masterful analysis of this nearly forgotten cohort of Americans. With a conceptual model drawn especially from the work of Richard Easterlin, and utilizing the treasure trove of PUMS data, Carlson has helped put the past, present, and future of current American generations into proper focus." (John Weeks, San Diego State University)

"In this masterful study, Carlson demonstrates that the generation born during the Great Depression and World War Two was blessed by virtue of their comparatively small numbers and the fortunate timing of world events. The richly documented account of the varying fates of American generations, based chiefly on IPUMS data, provides a fresh perspective on the history of the United States in the twentieth century. The Lucky Few succeeds both as a compelling argument and as a fascinating story. It will become a classic of historical sociology." (Steven Ruggles, Director, IPUMS Project)

"Carlson’s work provides a thoroughly scholarly but yet completely readable and enjoyable examination of the role of one’s period of birth (generation) on the social and economic circumstances faced by a generation. By carefully tracing the interactions between such factors as the size and life phases of generations as they experience unique historical, economic and other factors, he provides new insights into how important generation is in determining life chances and opportunities. Although his work carefully compares a wide range of social, historical and economic factors as they have affected numerous generations, he gives particular attention to what he refers to as "The Lucky Few" who were born before the much discussed baby-boom generation. Carlson’s work thus provides an examination of a previously neglected generation while at the same time teaching us how important generational location in general is in determining life chances. It will be a treasured work for by the scholars in this area of research and by general audiences who will find in it how numerous factors affect the impact of a generation and how being a member of a particular generation may limit or expand one’s life chances." (Steve H. Murdock, Director, US Census Bureau)

"Carlson’s Lucky Few is a tremendous book and makes an outstanding contribution to the demographic and social science literature about a group that has not received much attention. Not only is Carlson an imaginative demographer and sociologist, he is a superb writer. Carlson makes the issue of a cohort and cohort analysis come alive. Professors and students alike will enjoy reading this book and will learn a great deal." (Dudley L. Poston, Jr., Texas A&M University)

"A richly detailed view of the heretofore hidden aspects of generations within the American population. Great story ideas for us writers; new insights into subtleties of consumer markets differentiated by age." (Peter Morrison)