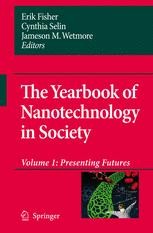 The ideas and imagery about the future that characterize nanotechnology today are shaped by multiple values and agendas which influence public investments,business strategies, infrastructure design, and public debate. Presenting Futures highlights a variety of ways that nanotechnology actors think about and seek to shape the future. It brings together social scientists, humanists, government officials, activist groups, designers, and public relations professionals into a multifaceted and at times conflicting dialogue through press releases, government reports, and advertisements taken from the front lines of the political discourse over nanotechnology, as well as original writings that situate nanotechnological futures within broader contexts. The chapters in this volume document various approaches to the future and how contemporary cultural conceptions about science, technology, and society are created and ultimately influence our own cognitive frames, social contests, and material practices.

More than a catalogue of visions, the Yearbook is designed to give social scientists, natural scientists, and the general public an opportunity to explore, reflect on, and ultimately critique these futures. In asking not so much what the future of nanotechnology may be, but rather how different social groups and organizations imagine and anticipate it, the Yearbook offers a series of starting points for exploring the role of the future in the present.

It provides a unique compilation of a major stream of work within nanotechnology in society and its connections in US and W. Europe. It captures and explores many of the tensions surrounding this new enterprise of predicting technologies’ futures, while indicating some of the ways this process reproduces past challenges in technoscience and society. The collection includes pieces from an admirable range of ‘stakeholders’ in nanotechnologies’ futures: STS researchers from several countries and a number of institutions representing diverse views about nanotechnologies’ potentials for assessment, and a smaller number from science, NGOs, industry, and government. The collection brings together several key US policy documents, as well as scholarly texts, more informal reports, and personal statements—the array of formats is an interesting approach to considering the ‘future in the making’ that is the nano enterprise and its societal interactions.