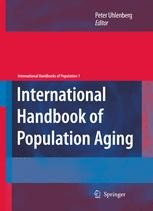 The International Handbook of Population Aging is the first comprehensive volume to examine research on a wide array of the profound implications of population aging. Global population aging is one of the most important issues facing human societies in the early twenty-first century. Population projections show that the proportion of the world’s population over age 60 will double between 2000 and 2050, and that about one-third of the people living in developed countries will be over age 60 in 2050. Already there are countries in Europe and Asia where the number of people over age 60 exceed the number of children, and by 2050 some of these countries will have twice as many old people as children. As noted by the 2002 UN World Assembly on Ageing Report, this global trend in population aging is unprecedented in human history, is pervasive across societies, is enduring (there is no going back to younger populations), and has profound implications for human beings.

"An absolutely essential reading. The rich fare this volume offers has no match or even close competitor in the professional literature."

"Exemplary in regard to the range of countries it covers and in focusing on many questions." Karl Ulrich Mayer, Stanley B. Resor Professor of Sociology, Yale University

"An impressive volume, showing the ageing populations around the globe through the lens of some of the best demographic observers."

This is the first handbook to appear in the International Handbooks of Population series, edited by Dudley Poston Jr., Texas A&M University, College Station, TX, USA. Future handbooks in this series will focus on Mortality, Poverty Populations, Migration, Race and Ethnic Demography and more.

"Survival to well into old age once was the lot of only a small fraction of humankind. Ongoing progress in lowering mortality—one of the greatest achievements of our modern civilization—now makes it a global experience. In combination with low fertility, a long-term necessity imposed by approaching limits to growth, this means population aging: a larger and larger share of older persons within the total population. The promises and the problems inherent in this secular shift, a shift that will be the dominant demographic fact of the twenty-first century, are enormous For anyone who wants to understand the far-reaching demographic, economic, and social ramifications of population aging this Handbook is absolutely essential reading. It brings together contributions of a large international group of eminent experts exploring all aspects of population aging. The chapters add up to a comprehensive and coherent tableau of facts, analysis, and probing of likely future trends. The rich fare this volume offers has no match or even close competitor in the professional literature." Paul Demeny Distinguished Scholar, Population Council Editor, Population and Development Review

"This new Handbook on Population Aging is not only long overdue, but also exemplary in regard to the range of countries it covers and in focusing on many questions about the often little understood consequences of societies with much larger proportions of elderly." Karl Ulrich Mayer Stanley B. Resor Professor of Sociology, Yale University

"The global community of scholars and policy-makers has been waiting for this impressive volume, showing the aging populations around the globe through the lens of some of their best demographic observers. It demonstrates how the world is changing through population aging, and how demography is changing in response to it." Martin Kohli Professor, Department of Social and Political Sciences European University Institute

“This is a very comprehensive collection, with 34 chapters bringing a wealth of material to bear on the topic. … the themes of international comparisons and of life course provide further unity to the text, as does the strong historical context. … This is a comprehensive text and an important guide to the literature, with good historical depth and cross-national comparisons.” (Roderic Beaujot, Canadian Studies in Population, Vol. 39 (1-2), Spring/Summer, 2012)