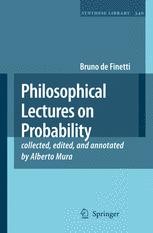 Philosophical Lectures on Probability contains the transcription of a series of lectures held by Bruno de Finetti (one of the fathers of subjective Bayesianism) and collected by the editor Alberto Mura at the Institute for Advanced Mathematics in Rome in 1979. The book offers a live in-context outlook on de Finetti’s later philosophy of probability. On several points de Finetti’s remarks revise widespread interpretations of his thought and reveal to be topical in the light of recent developments.

The book is enriched by an essay of Maria Carla Galavotti, introducing de Finetti’s philosophy of probability as well as biographical essential information. Moreover, it contains more than 180 editor’s notes, aimed at helping the reader to properly appreciate de Finetti’s thought and its impact on recent philosophical developments about probability.

Philosophical Lectures on Probability is addressed to a wide-ranging audience, including epistemologists, philosophers of science, social scientists, statisticians, economists, historians of mathematics and statistics and, in general, to everyone is interested in subjective Bayesianism and related philosophical problems. The technical prerequisites of the book do not exceed high school mathematics. This does not, however, prevent an elevated standard from the conceptual viewpoint.

Bruno de Finetti (1906–1985) is one of the most important mathematicians of XX century. He is considered the founder of the subjective interpretation of probability, together with the British philosopher F. P. Ramsey. Graduated in Mathematics at Milan Polytechnic in 1927, he served as actuary at Assicurazioni Generali Venezia and as a mathematician (1927–1931) at the National Central Bureau in Rome. In 1936 de Finetti won a competition for a chair at the University of Trieste but, according to Fascist laws in force, his appointment was not implemented, since he was not married. Only in 1950 he became full professor at the University of Trieste. From 1954 he taught at the University of Rome up to 1976, when he retired.

During his life de Finetti received numerous prizes and acknowledgments for his exceptional scientific contributions. In particular, he was prized from the Accademia dei Lincei in 1964, the Swiss Association of Actuaries in 1978 and the French Statistical Society in 1979. In April 1981 an International Conference on "Exchangeability in Probability and Statistics" was organised in Rome (the related Proceedings were published by North-Holland in 1982). Several celebrations and books were devoted to his memory after his death. The Italian government declared the years 2005 and 2006 "Definettian biennium", to celebrate together the 20th anniversary after his death and the first centenary after his birth. A long series of international conferences were organised in Rome, Trieste, Bologna and Milan in his honour, and several books by de Finetti were reprinted in Italy.

Beyond his fundamental studies on the logic of probability and expectation, de Finetti gave imperishable contributions to the theory of probability, to econometric, to financial and actuarial mathematics. He forerun by a dozen years Markowitz (who received the Nobel Prize for this contribution) discovery of the mean-variance method. In the field of Probability theory he introduced the central notion of infinitely divisible distribution and of exchangeability and proved the celebrated De Finetti’s Representation theorem, which is of both mathematical and philosophical outstanding relevance and plays a crucial role in modern Bayesian statistics.

Alberto Mura, Ph.D. is associate professor of Logic and Philosophy of Science. He was student of de Finetti at the National Institute for Advanced Mathematics in Rome. His interests include Foundations of Probability, Decision theory, Induction, Causality and Bayesian Law of Evidence. Among his publications are the books "La sfida scettica" (The sceptical challenge), Pisa, 1992 e "Dal noto all’ignoto: Causalità e induzione nel pensiero di David Hume" (From the Known to the Unknown: Causality and Induction in the thought of David Hume), Pisa 1996 and several papers, in particular When Probabilistic Support is Inductive, Philosophy of Science 1990, Hume’s Inductive Logic, Synthese 1998, and Deductive Probability, Physical Probability, and Partial Entailment (in Popper Philosopher of Science, Rubbettino 2006).

"The belated publication of de Finetti's lectures provides a welcome opportunity to celebrate the achievements of one of the remarkable thinkers of the last century and also to look again at his work as a whole." N.H. Bingham, Imperial College London

“The editor made an extraordinary effort to put the lectures as well as the discussions into proper context through a set of notes. These are very useful, and they often describe the future evolution of a subject which is touched on in the main text. A biographical sketch of de Finetti written by M. C. Gallavotti completes the information given in the book. … I am grateful to the editor … for making these lectures available in English to a broader audience.” (Enrico Scalas, Mathematical Reviews, Issue 2012 f)