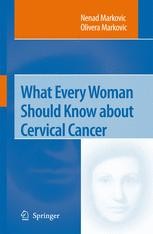 What Every Woman Should Know about Cervical Cancer

Recent introduction of HPV vaccines has raised hopes for immunization against cervical cancer and for the first time in the history of humanity for eradication of one malignant disease. This new “opportunity” has changed many current views on cervical cancer prevention, control diagnosis and treatment. Many canons and guidelines became subject of review and many revisions are coming. This book is intended to summarize most of these events and to present them to all women in a language understandable by the eneral public.

We expect the book will bring all readers the rationale for optimism and will provide guidance as how to gain knowledge and skills for critical thinking and making an educated decision when it will be necessary in their lives.

I live on the south of Europe, in Belgrade, Serbia. I am not a medical doctor, but I am witnessing tragic, horrible stories about women suffering from cervical cancer, some of them very close to me. Serbia is a small country in Europe but, unfortunately, leading in mortality and morbidity from cervical cancer. Every year 1,400 women get cervical cancer and 500 lose the battle against this disease. I also found that the situation is the same in the wider region. Now, as the campaign for cervical cancer prevention started, I had a chance to obtain statistical data (not only from Serbia but for the whole region) that during the last five years majority of women had not visited gynecologists’ offices and  have not had their Pap test done. In general, about two thirds of women do not have a regular gynecological exam. The motive to investigate women’ health situation in my country was the book “What Every Woman Should Know about Cervical; Cancer” authored by Drs. Olivera and Nenad Markovic.

Questions started to pile up, e.g., why in the country, with an ancient culture having civilized kingdom in middle ages, whose churches and monasteries are under the UNESCO protection, which had hospitals in the 12th Century with instructions for a proper diet, the health education and health culture is on such low level. It is also a paradox that Serbia has excellent widely recognized medical doctors and scientists, but women ask for help when the time between the diagnosis and the end is so short. Dark and cruel Balkan history can not be the only lasting alibi. In my opinion, the level of health culture is due to insufficient health education. Very thin connection exists between the elite and sophisticated science and the still conservative population, which are not opened to each other for a variety of reasons.

Drs Markovic’s book is a big discovery for me. It shows how to connect “difficult theories” of the science and “non-theoretical” mind of the general population. Two brilliant scientists, doctors and professors have taught us a lesson that should be remembered. For the beginning, I scheduled doctor’s appointments for myself and started to remind other women. The acceptance was beyond every expectation.

The unique feature of this book is the fact that it communicates equally successful with                      health professionals and with those who are not, systematizing and broadening the professional material and, in the same time, giving to the general audience a proper “curable dose “of facts: Carefully chosen and precisely defined subjects, exposing problems providing systematic and clear answers transfers the reader in the zone of sufficient understanding. This book “caught” me and kept me very interested to read everything until to the last page. The discovery of a biomarker of cervical abnormality, that I named B.M. “Olivera” is spreading in Belgrade because it has a universal value.

I think that what brings an extraordinary value to this book is putting the problem of cervical cancer on the existential level in its psychological and social aspects. With this, the authors have created a universal matrix which unites and organizes all elements for fight against cervical cancer. I learned from this book what is the way to transform endless paralytic energy of fear and despair (that every diagnosis of cancer is a deadly verdict) into a positive energy of fighting against the disease, what creates hopes.

The problem is particularly delicate with cervical cancer which provokes multiple frustrations, guilt and shame that leads to running away from the public scene to isolation and lowliness. The feeling of shame in conservative environment is stronger that the feeling of fear. The essence of the book is demystification of cervical cancer, putting it together with other diseases which can be prevented, curing and cured IF detected on time.

With demystification of the disease, it comes to the public space where a patient has now a chance to talk about her problems and the disease and to share her worries with others. I have participated in this process so many times trying to give a hand, to help being a careful listener allowing the patient to tell me what she feels comfortable to tell. Attempt to cheer the patient, making her laugh is sometimes successful, but sometimes it is not.  However, real stories about real people with happy ending (particularly about women that the patient is acquainted with), a pleasant  company that redirects the attention from the disease, a gentle hug, small gift, good book, a flower would return maybe only for a moment a smile on patient’s face.  In all these situations, I have a feeling that this support has an additional value: Those who provide support to cervical cancer patients are emissaries of the core idea of Drs. Markovic book to bring encouragement and support. The book which these authors have given us is a real friend and companion.

Sir Francis Bacon said, “Knowledge is power”, and when talking about cancer knowledge brings a power that alleviates fear. After reading What Every Woman Should Know about Cervical Cancer I came away from the book with a much better understanding of cervical cancer and with much less fear of it. As a lay person, who is also a veteran of breast cancer, I often find that it is difficult to read and understand medical books even when they are written for the general public. However I found What Every Woman Should Know about Cervical Cancer to be highly readable. It approached the subject of cervical cancer not only from an individual woman’s perspective but also from a global perspective of woman’s health. It was very informative about why early detection is so vital and also presented ways to increase early detection of cervical cancer. The book arms women with valuable information in assessing cancer risk and common sense approaches to understanding our physiology. Of particular interest to me was the in-depth discussion of the widely available Pap test and its importance in screening for cancer, including the history of Pap testing from its discovery in the 2nd half of the 20th Century to new technology such as MarkPap technology. Included in this segment is a frank discussion of the limitations of testing procedures including the troubling incidences of false negative rates and ways to reduce those rates. The book also gives recommendations for women on how to discuss Pap test results with their doctors, something that every woman can benefit from. The book does not stop with just the physical side of health however. In the final section of the book there is a wonderful discussion of the mind-body connection and how important a positive, healthy mind-body connection is in promoting healing. I found the chapter on the stages of stress to be very illuminating and relevant not only for cancer patients but for everyone. This is a book I plan to recommend to my friends and relatives. I think it is a book that everyone would benefit from reading.