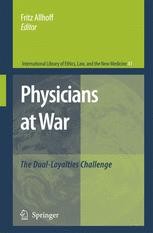 There are a range of ethical issues that confront physicians in times of war, as well

as some of the uses of physicians during wars. This book presents a theoretical

apparatus which undergirds those debates, namely by casting physicians as

being confronted with dual-loyalties during times of war. While this theoretical

apparatus has already been developed in other contexts, it has not been specifically

brought to bear on the ethical conflicts that attain in wars. Arguably, wars thrust

we can debate whether this conception is appropriate. For example, one could

argue that that non-medical duties cannot attach to physicians (e.g., due to nonoverlapping

spheres of justice), thus abrogating the dual-loyalty challenge. Or else

attach to physicians do not attach here.

In the first part of this book, these issues are debated. In the second part of

the book, the dual-loyalities frame is used to explore various substantive debates

that obtain when the military makes use of physicians. Physician involvement

in torture is a heated topic, and certainly the most visible element of the debate.

Also, however, we could use the dual-loyalties framework to explore issues in

other arenas, such as: development of chemical and biological weapons, medical

neutrality/battlefield triage, and so on. In each of these cases, the same tensions

arguably exist: physicians have duties both to their patients and â€œelsewhereâ€

(which, depending on the details of the view, could be any of the above-mentioned

"Physicians at war: The dual-loyalties challenge is a collection of essays which provide philosophical, political, and legal perspectives on many of the conflicting obligations which physicians may face during times of armed conflict. … valuable for anyone who is concerned about the role and obligations of physicians in national security/defense issues. … this book has important implications for other areas of medicine were physicians find themselves called upon to use their medical skills and knowledge in service of the state." (Jason Gatliff, Journal of Bioethical Inquiry, Vol. 6, 2009)