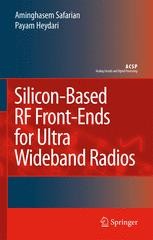 Ultra-wideband (UWB) is a promising technology for high speed short distance communication, as well as low data-rate low power communication for object localization and sensor networks. The most important characteristic of UWB is the operation in power-limited regime while achieving high channel capacity. The main challenge lies in designing transceivers for wideband signals.

The book begins with an introduction of several transceiver architectures for UWB. The discussion then focuses on RF front-end of the UWB radio. First, the design and analysis of a performance-optimized CMOS distributed LNA is presented. This is followed by design of novel distributed RF front-ends for UWB IF-receivers (UWB-DRF). The book continues with the introduction of a novel distributed direct conversion RF front-end (DDC-RF). The DDC-RF power and area-efficiently combines the wideband distributed approach with IQ requirement of a direct conversion receiver. Furthermore, deploying merged LNA/mixer enables low-power design, while achieving superior linearity over the conventional distributed amplifiers. The baseband output signals are zero/ low-IF, hence the output transmission lines in conventional distributed circuits are omitted, resulting in less area of the DDC-RF.

To increase data rate and to achieve immunity to multi-path fading, UWB systems employs multi-antenna configuration at receiver/transmitter. Innovative wideband variable delay and gain stages are then introduced to receive and transmit in desired direction. Finally, experimental results of the fabricated prototypes are presented.

Silicon-Based RF Front-Ends for UWB Radios will be of interest to RF circuit designers and students.

Aminghasem Safarian received the B.S. and M.S. degrees in electrical engineering from the Sharif University of Technology, in 2000, 2002, respectively. He received the Ph.D. degree in electrical engineering from the University of California, Irvine, in 2006. He is currently with Broadcom Corporation as a staff scientist working on RF ICs for wireless applications.

During the summer of 1997, he was with Bell-Labs, Lucent Technologies, where he worked on noise analysis in deep submicron very large-scale integrated (VLSI) circuits. During the summer of 1998, he was with IBM T. J. Watson Research Center, Yorktown Heights, NY, where he worked on gradient-based optimization and sensitivity analysis of custom-integrated circuits. He is currently an Associate Professor of Electrical Engineering at the University of California, Irvine, where his research interest is on the design of high-performance analog and RF ICs. He has published more than 50 papers in premier conferences on integrated circuit design including ISSCC, CICC, RFIC Symposium, DAC, ICCAD.

Dr. Heydari is the recipient of the 2005 National Science Foundation (NSF) CAREER Award, the 2005 IEEE Circuits and Systems Society Darlington Award, the 2005 Henry Samueli School of Engineering Teaching Excellence Award, the Best Paper Award at the 2000 IEEE International Conference on Computer Design (ICCD). His name was included in the 2006 Who's Who in Science and Engineering.