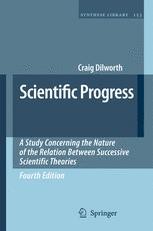 Kuhn and Feyerabend formulated the problem. Dilworth provides the solution.

In this highly original and insightful book, Craig Dilworth answers all the questions raised by the incommensurability thesis. Logical empiricism cannot account for theory conflict. Popperianism cannot account for how one theory is a progression beyond another. Dilworth’s Perspectivist conception of science does both.

While remaining within the bounds of classical philosophy of science, Dilworth does away with the logicism of his competitors. On the Perspectivist view theory conflict is not contradiction, and theory superiority does not consist in deductive subsumption or set-theoretic inclusion. Here the relation between theories is analogous to the application of individual concepts, and the question of theory superiority becomes one of relative applicability. In this way Dilworth succeeds in providing a conception of science in which scientific progress is based on both rational and empirical considerations.

"[Dilworth] convincingly works out how from his point of view it is possible to explain the conflict between two theories as an incompatibility of perspectives, and at the same time avoid sliding into relativism by giving criteria for scientific progress." Dialectica

From reviews of the previous editions:

“One of the most interesting contemporary approaches to questions related to the dynamics of science.” (Revista de filosofia)

“An insightful and original work.” (Risto Hilpinen, University of Miami)

“Free of unnecessary ballast, and written with didactical aptitude, this book gives a complete overview of how the different views of scientific progress have developed since the time of the Vienna Circle. It is a suitable introduction to a complex period in contemporary theory of knowledge. In later chapters the author presents his own standpoint, so that the work can also be used as a source of new impulses in this direction ... The author convincingly works out how from his point of view it is possible to explain the conflict between two theories as an incompatibility of perspectives, and at the same time avoid sliding into relativism by giving criteria for scientific progress ... I hope that my all too brief remarks will encourage the reader - and especially the interested non-specialist - to read this book.” (Dialectica)

“The topic is an exceptionally difficult, but extremely important one. Most of Dilworth's discussion is clear, well-written and technically flawless. Complemented by the right materials it should serve as a useful text for graduate and advanced undergraduate study.” (British Journal for the Philosophy of Science)

“Dilworth's work is clear and suggestive. The basic theses are presented with elegant philosophical sobriety, and the work as a whole can be called scientific not only for its subject matter, but also for its method.” (Investigacion y Ciencia)

“This work must be considered as one of the most significant contributions to appear in the present debate concerning the problem of scientific change and scientific progress.” (Evandro Agazzi, University of Fribourg)

“The book will quickly recommend itself, and reward the reader.” (Aslib)

“[The book] gives valuable instruction designed to keep one abreast of developments in philosophical reasoning.” (Methodology and Science)

“This study differs from the stance commonly taken by epistemologists. The author has, for natural reasons, begun with the present state of the subject; he moves by degrees however to a position which is not only theoretically original, but which brings to a discussion that has become asphyxiated the oxygen necessary for it to regain its original epistemological content.” (Epistemologia)

“This book provides an extremely clear description and critique of the best known contemporary versions of philosophy of science, and a very suggestive ... solution of the general problem of scientific progress.” (Annals of Science)

“The views discussed are carefully referenced and traced back to original sources. In this respect the work is especially useful to anyone interested in general problems in the philosophy of science.” (Choice)