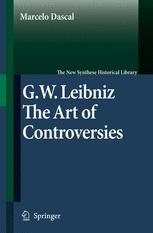 The Art of Controversies

Leibniz is known to the wide public and to many scholars mainly as a logician and mathematician, and as the creator of a fascinating but strange metaphysical system. In these, as well as in other fields, his remarkable innovations were achieved through painstaking efforts to establish a fruitful critical dialogue with the leading contemporary thinkers. He was no less important, however, in his practical endeavor to bring opponents to negotiate reasonable solutions to key political and religious conflicts of his time.

Both his theoretical and practical activities were informed by a philosophical mind that sought in all circumstances the most general underlying principles; by a juridical mind that sought to bring order and structure to human interaction, without sacrificing the necessary flexibility; by an argumentative mind that knows that persuading is often more important than proving; by a scientific mind eager to organize past and present knowledge so as not to miss any bit of information capable of pointing the way to new discoveries; by a theologian mind that refuses to admit that religious conflicts between true believers are irresolvable; and by an ethical and political mind whose major concern is to direct all our intellectual work towards improving the well-being of humankind.

All these perspectives (and more) are united in what this book identifies as his Art of Controversies, which might also be called an Art of Dialectical Cooperation. For it is based on the idea that knowledge production, acquisition, and evolution is not a one-man affair, but the result of the cooperation of many, coming from different perspectives; whence it follows that not only tolerance vis-à-vis the other, but also valuing the other’s contribution and integrating it – whether it stems from another age, continent, culture, discipline, religion, or individual – is indispensable. This dialectical Leibniz that emerges from the selected texts here translated, commented, and interpreted in the light of their context, isn’t for sure the familiar one. Yet, perhaps surprisingly, it is capable of shedding light on that old, familiar, yet incomplete image of Leibniz, and of adding thus a further reason for cherishing and cultivating the heritage of a truly great man.

“This book is an invaluable contribution to the history of (philosophical) ideas and also a contribution to the pragmatics of discussion and debate, including argumentation (in the vernacular sense) and logic. … should be read by philosophers of language (as well as historians of philosophy) as well as by pragmaticians and more generally by those who are concerned by the standards of public debates.” (Anne Reboul, Linguist List, April 2009)

"[...] an impressive scholarly achievement and an indispensable tool for understanding Leibniz's thinking on form and function of controversies." (Gerd Fritz, University of Gießen, Germany, Journal of Historical Pragmatics 9:1, 2008)

"The Art of Controversies is an outstanding collection of the most important Leibniz texts concerning his life-long obsession: the art of reasoning not merely in mathematics, but also and above all in human conflict. In the vast amount of existing literature on Leibniz, this book is a must-read." (Bernardino Orio de Miguel, Catedrático de Filosofía, 2008)

"This book … in its 45 chapters, newly translated or retranslated Leibnizan texts in which the philosopher pursues his lifelong passion for analyzing and refining the logical structure and practical conduct of intellectual debate. … This volume promises to function as a rich and important resource not only for Leibniz scholars and for scholars of early modern philosophy generally, but also for philosophers … . It should also prove valuable to historians of ideas, theorists of argumentation, logicians, and scholars of rhetoric." (Véronique M. Fóti, The Review of Metaphysics 61:2, 2007)

"[...] is a treasure trove for scholars interested in Leibniz's practical rationality and his practical action in general. [...] All in all, this is a very rich collection of translations of mostly unknown texts which will give food for thought for a long time to come and will inspire scholars to dig deeper into this most interesting and ignored area of Leibniz's thought." (Markku Roinila, Studia Leibnitiana, Band XXXVIII/XXXIX, Heft 2, 2006/2007)