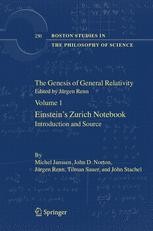 The Genesis of General Relativity

This four-volume work represents the most comprehensive documentation and study of the creation of general relativity; one of the fundamental physical theories of the 20th century. It comprises key sources from Einstein and others who from the late 19th to the early 20th century contributed to this monumental development. Some of these sources are presented here in translation for the first time. Einstein’s famous Zurich notebook, which documents the pivotal steps toward general relativity, is reproduced here for the first time and transcribed in its entirety. The volumes offer detailed commentaries and analyses of these sources that are based on a close reading of these documents supplemented by interpretations by the leading historians of relativity. All in all, the facets of this work, based on more than a decade of research, combine to constitute one of the most in-depth studies of a scientific revolution ever written.

These volumes prove that to Wittgenstein’s saying that "Genius is what makes us forget skill" ought to be added the statement "when viewing the finished product." Genius is also the ability to master the available resources and techniques and to synthesize them in a manner that overwhelms. The volumes are the product of a remarkable cooperative effort on the part of five of the most distinguished Einstein scholars. They deciphered and analyzed the extended research notes that Einstein made from 1912 to 1915 in his struggle to arrive at the final formulation of his theory of general relativity. In doing so they have given us deep new insights on Einstein’s creativity and on creativity in general, on context, on the role of past resources and expertise, and on the function of analogies. Their researches, observations and commentary have also made us think anew of the concept of a scientific revolution. Their splendid work is surely one of the most important and seminal scholarly accomplishments of recent times.

"The publication of The Genesis of General Relativity marks the outcome of 10 years of research into the origins of Einstein’s General Relativity Theory … . It provides a comprehensive study and in-depth analysis of how the work of Albert Einstein and his contemporaries changes our understanding of space, time and gravitation. … At the center of this reconstruction, is a commentary of Einstein’s unpublished research notes, so-called ‘Zurich Notebook’, presented in their entirety for the first time." (Renn Jürgen, www.physorg.com, February, 2007)

These volumes are the result of over two decades of effort, by most of the
leading scholars in the field, to understand the process that culminated in
1915 and 1916 in Einstein’s publication of the general theory of relativity.
In addition to relativity physicists the project involved, both individually
and more frequently collaboratively, historians and philosophers of science.
The central objective was, through this richly documented case study, to
identify universal features of the epistemological transformation that the
authors have called a “Copernican process”: How is it that heuristic guides
can render conceptual changes that invalidate their use? This dynamical
transmutation is firmly rooted in received societal and disciplinary scientific
knowledge. In the particular case under study here, most relativists will
probably have little trouble rejecting the mistaken popular notion that Einstein
was an isolated genius, creating his new world through shear inspired
imagination... Donald Salisbury, July 2008

To read more of this review  - paste this link into your browser.