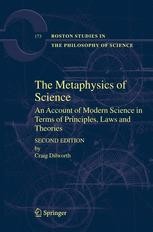 The Metaphysics of Science

The roots of this work lie in my earlier book, Scientific Progress, which first appeared in 1981. One of its topics, the distinction - tween scientific laws and theories, is there treated with reference to the same distinction as drawn by N. R. Campbell in his Physics: The Elements. Shortly after completing Scientific Progress, I read Rom Harré’s The Principles of Scientific Thinking, in which the concept of theory is even more clearly delineated than in Campbell, being directly connected to the notion of a model – as it was in my book. In subsequent considerations regarding science, Harré’s work thus - came my main source of inspiration with regard to theories, while Campbell’s remained my main source with respect to empirical laws. Around the same time I also read William Whewell’s Philosophy of the Inductive Sciences. In this work, Whewell depicts principles as playing a central role in the formation of science, and conceives of them in much the same way as Kant conceives of fundamental synthetic a priori judgements. The idea that science should have principles as a basic element immediately made sense to me, and from that time I have thought of science in terms of laws, theories and principles.

"Dilworth does not content himself with a mere philosophical analysis of the phenomenon of modern science, but tries to draw a lesson from the analysis applicable to the actual practice of science. Whereas in its beginnings modern science was a paradigm of open-mindedness, it is now in danger of becomming an ideology, due to its refusal to reflect on its own principles.  The Metaphysics of Science performs the much-needed function of opening the doors to such reflection - both for professional philosophers and scientists themselves''.(L.E. Fleischhacker, Epistemologia)

"Craig Dilworth’s second edition of The Metaphysics of Science contains the main text of an ambitious philosophical treatment intended to resolve realist-empiricist debates about the nature of science … . This book is worthwhile for philosophers of science and could profitably be assigned as reserve text for upper level undergraduate courses in history and philosophy of science of metaphysics. … Dilworth’s main aim is to propose and defend a metaphysics of science based on three ontological principles, uniformity of nature, substance, and causality." (Robert L. Muhlnickel, Metapsychology Online Reviews, Vol. 12 (22), May, 2008)

"Science makes metaphysical presuppositions. I must … at once declare an interest. … According to Dilworth, the three metaphysical principles constitute ‘the core of modern science’ … . They guide research and provide methodological rules. … Dilworth suggests that we need a new metaphysical paradigm for a new kind of science. … this book propounds an immensely important idea–even if one that received a much improved formulation at least twelve years before publication of the first edition." (Nicholas Maxwell, International Studies in the Philosophy of Science, August, 2009)