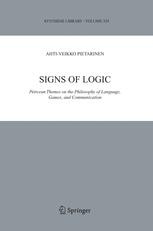 Peircean Themes on the Philosophy of Language, Games, and Communication

Charles Sanders Peirce (1839-1914), the principal subject of this book, was one of the most profound and prolific thinkers and scientists to have come out of the United States. His pragmatic logic and scientific methodology largely represent the application of interactive and intercommunicative triadic processes, best viewed as strategic and dialogic conceptualisations of logical aspects of thought, reasoning and action. These viewpoints also involve pragmatic issues in communicating linguistic signs, and are unified in his diagrammatic logic of existential graphs. The various game-theoretic approaches to the semantics and pragmatics of signs and language, to the theory of communication, and to the evolutionary emergence of signs, provide a contemporary toolkit, the relevance of which Peirce envisioned to a wondrous extent.

This work sheds considerable new light on these and other aspects of Peirce’s philosophy and his pragmatic theory of meaning. Many of his most significant writings in this context reflect his later thinking, covering roughly the last 15-20 years of his life, and they are still unpublished. Drawing comprehensively from his unpublished manuscripts, the book offers a fresh and rich picture of this remarkable man’s original involvement with logical aspects of thought in action.

"[...] a "must-have" for both the Peircean scholar and any other philosopher who wishes to relate Peirce's thinking on language and logic to other major thinkers and logical themes of the twentieth century (and beyond)."
Robert W. Burch, Texas A&M University, USA, in 'Project Muse - Scholarly Journals Online'

"Ahti-Veikko Pietarinen’s Signs of Logic is a ground-breaking contribution to Peircean semiotics, impressive in its scope and depth. It is the first book where Peirce’s pragmatic theory of meaning, logic of existential graphs, and theory of communication are presented in a unified game-theoretical framework. This work is indispensable to all serious students of Peirce’s philosophy of logic, language, and communication."
Risto Hilpinen, Professor of Philosophy, University of Miami, Coral Gables, USA

"Charles Peirce, America’s great scientific philosopher, was convinced that his late logic could contribute significantly to ‘man’s future intellectual development’, but he never got the chance to make his case. Now, a century later, Pietarinen shows that Peirce was right and that Peirce’s semiotic and logic can inform the theory of games and strategy and contribute to a general theory of intelligent agency. This is cutting edge philosophy and it is much to Pietarinen’s credit that he has been able to find such up-to-date relevance and significance in Peirce’s century old writings."
Nathan Houser, Professor of Philosophy, Director of the Institute for American Thought, Director and General Editor of the Peirce Edition Project

"In this magisterial work Ahti-Veikko Pietarinen has performed the valuable service of demonstrating the extent that Peirce’s logic admits of systematic expression, notwithstanding the scatter and fragmentariness of his writings. Even more impressive is the success of Signs of Logic in establishing Peirce’s remarkable prescience as anticipator of developments ranging from game-theoretic logic to dialogue logic, from Gricean pragmatics to the economics of cognitive practice, and so on. Signs of Logic is essential reading for the Peirce scholar and for any one interested in the development of logic in the century just past and beyond."
John Woods, Professor, FRSC, Dept. of Philosophy, University of British Columbia, Canada, and Charles S. Peirce Professor of Logic, Dept. of Computer Science, King’s College London, UK