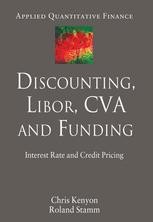 Providing the most up-to-date tools and techniques for pricing interest rate and credit products for the new financial world, this book discusses pricing and hedging, funding and regulation, and interpretation, as an essential resource for quantitatively minded practitioners and researchers in finance.

Dr. Chris Kenyon (London, UK) is a Director at Lloyds Banking Group in the front office Quantitative Research – CVA / FVA group. Previously he was head quant for counterparty risk at Credit Suisse, and at DEPFA Bank PLC he was Head of Structured Credit Valuation (post crisis), working on pricing model development and validation, and market risk. He has also held positions at IBM Research, and Schlumberger where he applied real options pricing to everything from offshore rig lease extension options to variable volume outsourcing contracts. Chris holds a PhD in Applied Mathematics from Cambridge University where he was a Research Fellow (Computer Modeling), and an MSc in Operations Research from the University of Austin, Texas. He is a regular writer and conference speaker, his papers have appeared in Quantitative Finance, Risk Magazine, Operations Research, IEEE Computer amongst others, and presented at academic conferences and industry meetings including those organized by Bachelier Finance Society, WBS, Marcus Evans, Risk Magazine, and many more.

Dr. Roland Stamm is Head of Risk Methods and Valuation at HRE Group (formerly DEPFA Bank), where he is responsible (among other things) for the development of new pricing models, model set up, validation and calibration, CVA adjustments and market risk methodology. He was previously Head of Valuation at HRE Group, and has also held positions as Head of Market Risk Products, Head of IT Development and Project Manager, all at DEPFA Bank. He holds a PhD in Mathematics (Algebraic Topology) from the Westfälische Wilhelms-Universität, Münster where he was awarded a magna cum laude for his thesis The K- and L- Theory of Certain Discrete Groups, and received a master's degree in Mathematics from the Johannes-Gutenberg-Universität, Mainz.

'The ongoing economic situation is pushing researchers to re-discuss and update the fundamentals of financial modeling. Writing an encyclopaedic book on financial modeling for exotics based on the risk free rate, a unique discount curve, no credit risk and no liquidity costs would be neither relevant nor realistic in 2012. This is not such a book. The reader will find here an interesting tackling of current and relevant problems such as multi-curve modeling and credit valuation adjustments, with a very interesting discussion of closeout and especially goodwill, which cannot be found anywhere else to the best of this endorser's knowledge. Funding costs, hints at systemic risk, regulation and Basel III are also considered. It is great to find a quantitatively detailed analysis of such aspects in a single book, and readers who are open-minded and attentive to the current challenges posed by the market will find this book to be informative, relevant, pleasant to read and even entertaining.' - Professor Damiano Brigo, Head of the Mathematical Finance Research Group, Imperial College, London, UK, and author of Interest Rate Models: Theory and Practice and Credit Models and the Crisis.