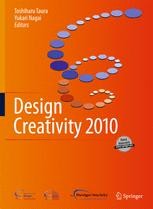 What is ‘design creativity’? It is impossible to answer this question without considering why human beings can – and do – ‘design’. Design creativity is instrumental in not only addressing social problems faced across the world,  but also evoking an innate appreciation for beauty and a sense of personal contentment.

Toshiharu Taura is Professor of Graduate School of Engineering at Kobe University.  He received his B.S., M.S., and Dr. Eng. degrees from the University of Tokyo, Japan, in 1977, 1979, and 1991, respectively. In 1992, he joined the University of Tokyo as an Associate Professor, and in 1998, he joined Kobe University as Professor at the Mechanical Engineering Department. He is currently working on several research themes that focus on the creative thought process of both engineering and industrial design, including the interdisciplinary aspects of design science.

He is a member of the Advisory Board, is heading the Design Creativity SIG of the Design Society and a Fellow of the DRS (Design Research Society). He is the recipient of the Best Paper Prize at the 2nd International Conference on Design Computing and Cognition (2006), as well as some domestic awards.

Yukari Nagai is Associate Professor of Graduate School of Knowledge Science at Japan Advanced Institute of Science and Technology since 2004. She graduated from Musashino Art University, majored in Design (M.A), and researched abroad at Creativity and Cognition Research Studios, Loughborough University (2002). She received PhDs from Chiba University (2003), and University of Technology, Sydney (2009). Best Paper Prize was awarded to her at DESIGN2002 Conference and International Conference on Design Computing and Cognition (2006). She is a member of the Design Society and a co-chair of SIG Design Creativity. She has served as an editorial board member of the Journal of Engineering Design, and contributed as guest editor of special issue of journal “Artifact” (2008). Her research interests are design creativity, design knowledge and creative cognition.