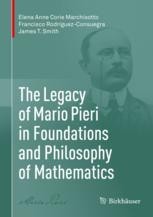 The Legacy of Mario Pieri in Foundations and Philosophy of Mathematics

The Italian mathematician Mario Pieri (1860–1913) played a major role in the development of algebraic geometry and foundations of mathematics around the turn of the twentieth century.  This volume is the second in a series intended to make Pieri’s research in diverse fields—mathematical logic and philosophy of mathematics, foundations of projective, inversive, and elementary geometry, algebraic and differential geometry, and vector analysis—accessible to today’s scholars and to assess its importance (yet little recognized) in historical and modern contexts.

The Legacy of Mario Pieri in Foundations and Philosophy of Mathematics examines Pieri’s underlying philosophy of mathematics and his research goals, highlighting one of his most influential achievements, his axiomatizations of projective and elementary geometry. Its chapters include three of Pieri’s pioneering works, translated by the authors and appearing in English for the first time, as well as an analysis of the role of this research in its larger context. Together, these translations and the accompanying interpretation accurately capture Pieri’s expository style, philosophical perspective, and his foundational research, which has influenced generations.

With an excellent index, exhaustive references, and engaging discussions that reveal Pieri’s work in its historical context, this volume will appeal to scholars and advanced students interested in the history and philosophy of mathematics and logic, as well as readers with a general knowledge of geometry at the intermediate level.

A list of errata can be found on the author Smith’s personal webpage.