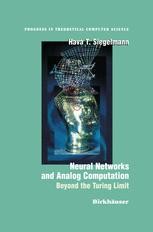 Beyond the Turing Limit

The theoretical foundations of Neural Networks and Analog Computation conceptualize neural networks as a particular type of computer consisting of multiple assemblies of basic processors interconnected in an intricate structure. Examining these networks under various resource constraints reveals a continuum of computational devices, several of which coincide with well-known classical models. What emerges is a Church-Turing-like thesis, applied to the field of analog computation, which features the neural network model in place of the digital Turing machine. This new concept can serve as a point of departure for the development of alternative, supra-Turing, computational theories. On a mathematical level, the treatment of neural computations enriches the theory of computation but also explicated the computational complexity associated with biological networks, adaptive engineering tools, and related models from the fields of control theory and nonlinear dynamics.

The topics covered in this work will appeal to a wide readership from a variety of disciplines. Special care has been taken to explain the theory clearly and concisely. The first chapter review s the fundamental terms of modern computational theory from the point of view of neural networks and serves as a reference for the remainder of the book. Each of the subsequent chapters opens with introductory material and proceeds to explain the chapter’s connection to the development of the theory. Thereafter, the concept is defined in mathematical terms.

Although the notion of a neural network essentially arises from biology, many engineering applications have been found through highly idealized and simplified models of neuron behavior. Particular areas of application have been as diverse as explosives detection in airport security, signature verification, financial and medical times series prediction, vision, speech processing, robotics, nonlinear control, and signal processing. The focus in all of these models is entirely on the behavior of networks as computer.

The material in this book will be of interest to researchers in a variety of engineering and applied sciences disciplines. In addition, the work may provide the base of a graduate-level seminar in neural networks for computer science students.

"All of the three primary questions are considered: What computational models can the net simulate (within polynomial bounds)? What are the computational complexity classes that are relevant to the net? How does the net (which, after all, is an analog device) relate to Church’s thesis? Moreover the power of the basic model is also analyzed when the domain of reals is replaced by the rationals and the integers."