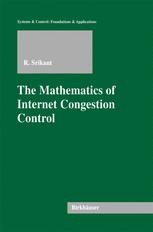 The Mathematics of Internet Congestion Control

Features and topics include:

* A presentation of Kelly's convex program formulation of resource allocation on the Internet;

* A solution to the resource allocation problem which can be implemented in a decentralized manner, both in the form of congestion control algorithms by end users and as congestion indication mechanisms by the routers of the network;

* A discussion of simple stochastic models for random phenomena on the Internet, such as very short flows and arrivals and departures of file transfer requests.

Intended for graduate students and researchers in systems theory and computer science, the text assumes basic knowledge of first-year, graduate-level control theory, optimization, and stochastic processes, but the key prerequisites are summarized in an appendix for quick reference. The work's wide range of applications to the study of both new and existing protocols and control algorithms make the book of interest to researchers and students concerned with many aspects of large-scale information flow on the Internet.

"This first book on the mathematics of congestion control [is] very useful for both students and researchers, but also for system engineers developing new Internet protocols. This is an elementary book for graduate students that uses a rich pallet of mathematical tools: convex optimization and control theory (Lyapunov stability and Nyquist criteria and stochastic processes). The tools are summarized well in appendices which makes the book self-contained and easy to read. The book is very well written and will undoubtedly remain a major reference on the topic for years to come."   —Mathematical Reviews

"This well-written book presents an overview of the mathematics behind internet congestion control. Focusing on the well-established TCP protocol, it starts with a gentle introduction on TCP and the packet/acknowledgement structure of the internet, before proceeding to congestion and the principles of congestion control…. Overall, this book presents in an easy-to-understand way the principles of internet congestion control with a focus on the mathematical concepts behind them. The book concludes with a useful index and a rich source of bibliographical references."   —Zentralblatt Math

…All material in the book is accessible to graduate or even undergraduate students of mathematical and electrical engineering disciplines. Many chapters are supplied with appendices which review the necessary background material and make the book self-contained. In conclusion, this book can be equally recommended for beginners as well as for expert researchers working in the domain of congestion control. For beginners, the book will be a good starting point from which to explore a vast and rapidly growing body of literature on the subject of Internet congestion control. For expert researchers, the book will definitely help to place congestion control in perspective and will point to new avenues in this exciting research domain." —SIAM Book Reviews