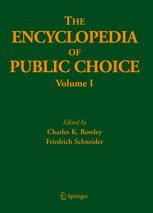 The Encyclopedia of Public Choice

The Encyclopedia provides a detailed and comprehensive account of the subject known as public choice. However, the title would not convey suf- ciently the breadth of the Encyclopedia’s contents which can be summarized better as the fruitful interchange of economics, political science and moral philosophy on the basis of an image of man as a purposive and responsible actor who pursues his own objectives as efficiently as possible. This fruitful interchange between the fields outlined above existed during the late eighteenth century during the brief period of the Scottish Enlightenment when such great scholars as David Hume, Adam Ferguson and Adam Smith contributed to all these fields, and more. However, as intell- tual specialization gradually replaced broad-based scholarship from the m- nineteenth century onwards, it became increasingly rare to find a scholar making major contributions to more than one. Once Alfred Marshall defined economics in neoclassical terms, as a n- row positive discipline, the link between economics, political science and moral philosophy was all but severed and economists redefined their role into that of ‘the humble dentist’ providing technical economic information as inputs to improve the performance of impartial, benevolent and omniscient governments in their attempts to promote the public interest. This indeed was the dominant view within an economics profession that had become besotted by the economics of John Maynard Keynes and Paul Samuelson immediately following the end of the Second World War.

"… Many entries cover various aspects of voting, regulation, and government subsidy programs. Additional entries on al-Qaeda, blackmail, the medieval church, and women's suffrage reflect the wide-ranging interests of public-choice researchers. The writing, as nontechnical as possible, makes the encyclopedia accessible to readers in many disciplines. Summing Up: Recommended. Undergraduates and higher."
(L. M. Stuart, Choice, June 2004)

"The Encyclopedia of Public Choice will surely prove to be a major sourcework for students and scholars working in public choice and related areas. Professors Rowley and Schneider are major contributors to the public choice literature, and they have combined their talents and insights in this project to produce a work on public choice that will rank as a classic in the field. The coverage of subject matter is extensive and excellent, the individual contributors are well known scholars in the field, and these men and women have framed their papers not simply as surveys of a particular aspect of public choice theory or practice but as original contributions in their own right. My hat is off to the editors for a job well done."
(Robert D. Tollison, Professor of Economics, University of Mississippi)
"The Encyclopedia of Public Choice is a welcome addition to a literature that has grown by leaps and bounds over the past half century. Containing scores of carefully chosen concept entries, longer essays and autobiographies contributed by and about the field's founding fathers as well as several generations of younger scholars who have guided public choice into the intellectual mainstream, the Encyclopedia not only summarizes the major strides already taken by researchers working at the intersection of economics and political science, but breaks new ground in applying public choice reasoning to current events as diverse as corporate accounting scandals, globalization and terrorism. Monumental in conception and written in a lively and accessible style, the Encyclopedia is an authoritative and comprehensive point of entry into a fertile research program that illuminates human behavior in a variety of non-market settings, such as committees, bureaucracies, legislatures and clubs, where collective action necessarily displaces individual action. The Encyclopedia of Public Choice promises to become a reference work of lasting value for students of economics, sociology and political science, academicians, policymakers and observers of the public policy process. At long last, in the editorial team of Charles Rowley and Friedrich Schneider, public choice has its Samuel Johnson."
(William F. Shughart II, University of Mississippi, senior editor of The Elgar Companion to Public Choice (Edward Elgar, 2001)

"Those who teach the history of economic thought should find the biographies valuable. Students in my international trade class for advanced undergrads and graduate students from law and public policy … appreciate Hillman’s essays on trade policy. … these are good essays to bring balance to courses and contain excellent references for term papers. … as a reference for libraries and people looking for an introduction to the main concepts of the field, the two-volume set is very useful … ." (Edward Tower, Public Choice, 2006)

"This two-volume review of the public-choice tradition is written by a set of esteemed authors, many of whom can be considered the foremost experts on the topics on which they write … . All in all, a good book to have in your library for casual perusal and to check up specifics." (Keith Dowding, Political Studies Review, Vol. 2 (3), 2004)