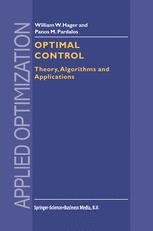 February 27 - March 1, 1997, the conference Optimal Control: The­ ory, Algorithms, and Applications took place at the University of Florida, hosted by the Center for Applied Optimization. The conference brought together researchers from universities, industry, and government laborato­ ries in the United States, Germany, Italy, France, Canada, and Sweden. There were forty-five invited talks, including seven talks by students. The conference was sponsored by the National Science Foundation and endorsed by the SIAM Activity Group on Control and Systems Theory, the Mathe­ matical Programming Society, the International Federation for Information Processing (IFIP), and the International Association for Mathematics and Computers in Simulation (IMACS). Since its inception in the 1940s and 1950s, Optimal Control has been closely connected to industrial applications, starting with aerospace. The program for the Gainesville conference, which reflected the rich cross-disci­ plinary flavor of the field, included aerospace applications as well as both novel and emerging applications to superconductors, diffractive optics, non­ linear optics, structural analysis, bioreactors, corrosion detection, acoustic flow, process design in chemical engineering, hydroelectric power plants, sterilization of canned foods, robotics, and thermoelastic plates and shells. The three days of the conference were organized around the three confer­ ence themes, theory, algorithms, and applications. This book is a collection of the papers presented at the Gainesville conference. We would like to take this opportunity to thank the sponsors and participants of the conference, the authors, the referees, and the publisher for making this volume possible.