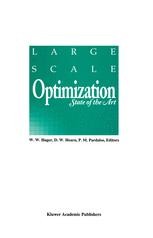 State of the Art

On February 15-17, 1993, a conference on Large Scale Optimization, hosted by the Center for Applied Optimization, was held at the University of Florida. The con­ ference was supported by the National Science Foundation, the U. S. Army Research Office, and the University of Florida, with endorsements from SIAM, MPS, ORSA and IMACS. Forty one invited speakers presented papers on mathematical program­ ming and optimal control topics with an emphasis on algorithm development, real world applications and numerical results. Participants from Canada, Japan, Sweden, The Netherlands, Germany, Belgium, Greece, and Denmark gave the meeting an important international component. At­ tendees also included representatives from IBM, American Airlines, US Air, United Parcel Serice, AT & T Bell Labs, Thinking Machines, Army High Performance Com­ puting Research Center, and Argonne National Laboratory. In addition, the NSF sponsored attendance of thirteen graduate students from universities in the United States and abroad. Accurate modeling of scientific problems often leads to the formulation of large­ scale optimization problems involving thousands of continuous and/or discrete vari­ ables. Large scale optimization has seen a dramatic increase in activities in the past decade. This has been a natural consequence of new algorithmic developments and of the increased power of computers. For example, decomposition ideas proposed by G. Dantzig and P. Wolfe in the 1960's, are now implement able in distributed process­ ing systems, and today many optimization codes have been implemented on parallel machines.