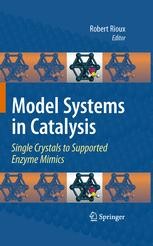 Researchers in catalysis and surface science will find this book to be an invaluable compendium of material on the preparation, characterization, and investigation of model catalyst systems, including single sites, supported and unsupported clusters, and single crystals of metal, metal alloys, and metal oxides. The connections made between heterogeneous and homogeneous catalysis are particularly welcome.

This is a superb collection of papers covering the latest developments in the use of models in fundamental catalytic science. It is a valuable addition to the libraries of those interested in the fundamentals of surface-catalyzed reactions.

This is a comprehensive collection of the development of surface science over the last four decades. The book proves that the era of oversimplified model systems is over; the dynamics of materials and reactions is now accessible for rigorous experimental and theoretical study. The book is an invaluable, authoritative source of information both for the surface scientist and the catalysis practitioner.

This book is an important resource for anyone interested in the latest advances in catalysis. It contains contributions from leaders in the field, and addresses issues related to mechanism, characterization, and selectivity. A wide range of new catalyst design principles is introduced, within the context of chiral surfaces for enantioselective reactions, novel catalyst compositions and structures, well-defined, single site catalytic centers, and the influence of nanostructures on catalytic performance.

“This book provides a useful overview for new researchers in the catalysis field and would provide a useful foundation for a course in the subject. The chapters are generally well written and provide context for the material. Given that a comparable book was not published in at least a decade, this book provides a great starting point to train researchers in model studies of catalysis.” (Cynthia Friend, Angewandte Chemie, Vol. 49 (2), 2010)

“This timely book presents 23 chapters that are snapshots emphasizing recent research on model solid catalysts. … The authors of this book have been well chosen, and the chapters for the most part are insightful, informative, and readable … . The book is well organized, pleasing in presentation, and bolstered by lots of fine illustrations, many in color. … provide many readers a quick, enjoyable introduction to important segments of modern surface science and catalysis.”­­­ (B. C. Gates, Catalysis Letters, Vol. 141, 2011)