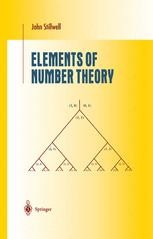 This book is a concise introduction to number theory and some related algebra, with an emphasis on solving equations in integers. Finding integer solutions led to two fundamental ideas of number theory in ancient times - the Euclidean algorithm and unique prime factorization - and in modern times to two fundamental ideas of algebra - rings and ideals.

The development of these ideas, and the transition from ancient to modern, is the main theme of the book. The historical development has been followed where it helps to motivate the introduction of new concepts, but modern proofs have been used where they are simpler, more natural, or more interesting. These include some that have not yet appeared in textbooks, such as a treatment of the Pell equation using Conway's theory of quadratic forms. Also, this is the only elementary number theory book that includes significant applications of ideal theory. It is clearly written, well illustrated, and supplied with carefully designed exercises, making it a pleasure to use as an undergraduate textbook or for independent study.

John Stillwell is Professor of Mathematics at the University of San Francisco. He is the author of several highly regarded books published by Springer-Verlag, including Mathematics and Its History (Second Edition 2001), Numbers and Geometry (1997) and Elements of Algebra (1994).

"Solving equations in integers is the central problem of number theory, so this book is truly a number theory book, with most of the results found in standard number theory courses. … The book is clearly written, well organized and is a very pleasurable reading: it is an excellent and very useful undergraduate textbook. However, thanks to the many examples and exercises, it is well suitable for independent study, as well." (Lászlo Megyesi, Acta Scientiarum Mathematicarum, Vol. 71, 2005)

"In this carefully crafted undergraduate number theory text, Stillwell walks the reader through the main topics that belong in any introduction to number theory … but he does so in a way that highlights the beguiling nature of number theory problems and keeps their rich history alive. … This book has some additional features that will draw you to order it for your courses. … Stillwell … presents a compelling argument for studying the ancient and modern problems of number theory … ." (Gwynneth G. H. Coogan, Mathematical Reviews, 2004 j)

"A solid systematic introduction to (algebraic) number theory which is truly elementary in the sense that a bright young undergraduate could make rapid unaided progress through this book. … There are lots of goodies in the sidelines and the attention to clarity of writing and to pedagogic care give it a high rank amongst competing texts. … Stillwell’s book makes a very positive contribution to the coherence of the subject, which adds … to the satisfaction of studying it." (John Baylis, The Mathematical Gazette, Vol. 88 (512), 2004)

"Stillwell has taken very careful aim at his target audience and hit them squarely between the eyes. … the author has done a wonderful job of conveying his obvious love of the subject to the reader. … The author … covers basic classical number theory. … Each chapter opens with a substantial preview stating the central concepts which are about to appear. … In short, this book is a delight to read and is ideally suited to a beginning course in number theory." (Ralph H. Buchholz, The Australian Mathematical Society Gazette, Vol. 31 (1), 2004)

"The book is a concise introduction to number theory and some related algebra, with an emphasis on solving equations in integers. … The historical development has been followed where it helps to motivate the introduction of new concepts, but modern proofs have been used where they are simpler, more natural, or more interesting. … Also, this is the only elementary number theory book that includes significant applications of ideal theory." (Zentralblatt für Didaktik der Mathematik, February, 2003)

"The text would be suitable for the standard elementary number theory course. … could serve as an introduction to algebraic number theory. … has a number of unusual and attractive features. … there is much in this book that would make it an appealing choice for a group of able mathematics majors. … the book under review provides a valuable and original alternative to the many current texts on introductory number theory." (David W. Boyd, SIAM Review, Vol. 46 (2), 2004)