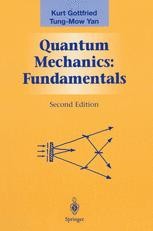 This classic text provides a comprehensive exposition of the concepts and techniques of quantum mechanics. The phenomena treated are sufficiently simple to allow the student to readily assess the validity of the models so that attention is not deflected from the heart of the subject. To that end, the book concentrates on systems that can either be solved exactly or be handled by well-controlled, plausible approximations. With few exceptions, this means systems with a small number of degrees of freedom. The exceptions are many—electron atoms, the electromagnetic field and the Dirac equation. The inclusion of the last two topics reflects the belief that every physicist should now have some knowledge of these cornerstones of modern physics.

This new edition has been completely revised and rewritten throughout, but retains the clarity and readability of the first edition.

Born in Vienna, Kurt Gottfried emigrated to Canada in 1939 and received his Ph.D. in theoretical physics from the Massachusetts Institute of Technology in 1955. He is a professor emeritus of physics at Cornell University, and had previously been at Harvard University and at CERN in Geneva, Switzerland. He is the coauthor of Concepts of Particle Physics (with V.F. Weisskopf) and of Crisis Stability and Nuclear War. Gottfried has done research in both nuclear and particle physics; he has an active interest in arms control and human rights and is a founder and currently the Chair of the Union of Concerned Scientists.

Tung-Mow Yan, originally from Taiwan, received his Ph.D. in theoretical physics from Harvard University in 1968. He has been a member of the Cornell University faculty since 1970 after spending two years as a research associate at the Stanford Linear Accelerator Center. He has conducted research in many areas of elementary particle physics.

JOURNAL OF PHYSICS A: MATHEMATICAL AND GENERAL (27 FEBRUARY 2004)

"… [The first edition] has become one of the most used and respected accounts of quantum theory … Gottfried and Yan’s book contains a vast amount of knowledge and understanding. As well as explaining the way in which quantum theory works, it attempts to illuminate fundamental aspects of the theory … For use with a well-constructed course (and, of course, this is the avowed purpose of the book; a useful range of problems is provided for each chapter), or for the relative expert getting to grips with particular aspects of the subject or aiming for a deeper understanding, the book is certainly ideal."

"…especially useful for graduate students and professors who have time to go beyond the bare essentials of a topic and explore it in depth… I would recommend the book for its lucid discussions of less familiar topics alone, but the authors do not short-change the standard subjects… I expect the second edition of Gottfried and Yan to join my library of well thumbed-through texts."

"The book under review offers the reader in-depth physical and mathematical understanding of quantum mechanics. The book is the second edition of Gottfried’s Quantum mechanics. … Readers’ anticipations have finally been rewarded by the second edition of the earlier book, which is a complete revision covering most of the topics and much more … . The appendix contains the values of important physical constants, some useful operator identities … . The end notes at the conclusion of each chapter contain many useful references." (Howard E. Brandt, Mathematical Reviews, Issue 2007 f)