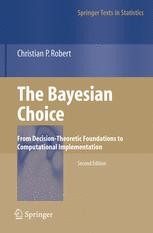 From Decision-Theoretic Foundations to Computational Implementation

Winner of the 2004 DeGroot Prize

This paperback edition, a reprint of the 2001 edition, is a graduate-level textbook that introduces Bayesian statistics and decision theory. It covers both the basic ideas of statistical theory, and also some of the more modern and advanced topics of Bayesian statistics such as complete class theorems, the Stein effect, Bayesian model choice, hierarchical and empirical Bayes modeling, Monte Carlo integration including Gibbs sampling, and other MCMC techniques. It was awarded the 2004 DeGroot Prize by the International Society for Bayesian Analysis (ISBA) for setting "a new standard for modern textbooks dealing with Bayesian methods, especially those using MCMC techniques, and that it is a worthy successor to DeGroot's and Berger's earlier texts".

Christian P. Robert is Professor of Statistics in the Applied Mathematics

Department at the Université Paris Dauphine, and Head of the Statistics Laboratory at the Center for Research in Economics and Statistics (CREST) of the National Institute for Statistics and Economic Studies (INSEE) in Paris. In addition to many papers on Bayesian statistics, simulation methods, and decision theory, he has written four other books, including Monte Carlo Statistical Method (Springer 2004) with George Casella and Bayesian Core (Springer 2007) with Jean-Michel Marin. He has served or is serving as associate editor for the Annals of Statistics, Bayesian Analysis, the Journal of the American Statistical Association, Statistical Science, and Sankhya. and is editor of the Journal of the Royal Statistical Society (Series B) from 2006–2009. He is a fellow of the Institute of Mathematical Statistics, and received the 1995 Young Statistician Award of the Société de Statistique de Paris.

Review of the second edition:

"The text reads fluently and beautifully throughout, with light, good-humoured touches that warm the reader without being intrusive. There are many examples and exercises, some of which draw out the essence of work of other authors. Only a few displays and equations have numbers attached. This is an extremely fine, exceptional text of the highest quality." (ISI Short Book Reviews)

"The text reads fluently and beautifully throughout, with light, good-humoured touches that warm the reader without being intrusive. There are many examples and exercises, some of which draw out the essence of work of other authors. Each chapter ends with a "Notes" section containing further brief descriptions of research papers. A reference section lists about eight hundred and sixty references. Each chapter begins with a quotation from "The Wheel of Time" a sequence of books by Robert Jordan. Only a few displays and equations have numbers attached. This is an extremely fine, exceptional text of the highest quality."
ISI Short Book Reviews, April 2002

"This book is an excellent introduction to Bayesian statistics and decision making. The author does an outstanding job in explicating the Bayesian research program and in discussing how Bayesian statistics differs form fiducial inference and from the Newman-Pearson likelihood approach…The book would be well suited for a graduate-level course in a mathematical statistics department. There are numerous examples and exercises to enhance a deeper understanding of the material. The writing is authoritative, comprehensive, and scholarly."

"This book is a publication in the well-known Springer Series in statistics published in 2001. It is a textbook that presents an introduction to Bayesian statistics and decision theory for graduate level course … . The textbook contains a wealth of references to the literature; therefore it can also be recommended as an important reference book for statistical researchers. … for those who want to make a Bayesian choice, I recommend that you make your choice by getting hold of Robert’s book, The Bayesian Choice." (Jan du Plessis, Newsletter of the South African Statistical Association, June, 2003)

"This is the second edition of the author’s graduate level textbook ‘The Bayesian choice: a decision-theoretic motivation.’ … The present book is a revised edition. It includes important advances that have taken place since then. Different from the previous edition is the decreased emphasis on decision-theoretic principles. Nevertheless, the connection between Bayesian Statistics and Decision Theory is developed. Moreover, the author emphasizes the increasing importance of computational techniques." (Krzysztof Piasecki, Zentralblatt MATH, Vol. 980, 2002)