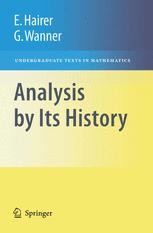 Analysis by Its History

This book presents first-year calculus roughly in the order in which it first was discovered. The first two chapters show how the ancient calculations of practical problems led to infinite series, differential and integral calculus and to differential equations. The establishment of mathematical rigour for these subjects in the 19th century for one and several variables is treated in chapters III and IV. The text is complemented by a large number of examples, calculations and mathematical pictures and will provide stimulating and enjoyable reading for students, teachers, as well as researchers.

The authors include a large number of once-traditional subjects which have now vanished from the analysis curriculum, at least in the standard American courses. Thus we find continued fractions, elliptic integrals, the Euler-MacLaurin summation formula, etc., most of which are found only in more compendious works. Many of the exercises are inspired by original papers, with the bibliographic references sometimes given. The work is very well illustrated. The book is definitely an analysis text, rather than a history, but a great deal of reliable historical material is included. For those seeking an alternative to the traditional approach, it seems to me to be of great interest.

The authors...have assembled an impressive array of annotated results, quotations, tables, charts, figures and drawings, many copied from original documents....they write with great enthusiasm and with evident affection for both analysis and history.