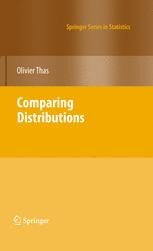 Comparing Distributions refers to the statistical data analysis that encompasses the traditional goodness-of-fit testing. Whereas the latter includes only formal statistical hypothesis tests for the one-sample and the K-sample problems, this book presents a more general and informative treatment by also considering graphical and estimation methods. A procedure is said to be informative when it provides information on the reason for rejecting the null hypothesis. Despite the historically seemingly different development of methods, this book emphasises the similarities between the methods by linking them to a common theory backbone.

The book gives a self-contained theoretical treatment of a wide range of goodness-of-fit methods, including graphical methods, hypothesis tests, model selection and density estimation. It relies on parametric, semiparametric and nonparametric theory, which is kept at an intermediate level; the intuition and heuristics behind the methods are usually provided as well. The book contains many data examples that are analysed with the cd R-package that is written by the author. All examples include the R-code.

Because many methods described in this book belong to the basic toolbox of almost every statistician, the book should be of interest to a wide audience. In particular, the book may be useful for researchers, graduate students and PhD students who need a starting point for doing research in the area of goodness-of-fit testing. Practitioners and applied statisticians may also be interested because of the many examples, the R-code and the stress on the informative nature of the procedures.

Olivier Thas is Associate Professor of Biostatistics at Ghent University. He has published methodological papers on goodness-of-fit testing, but he has also published more applied work in the areas of environmental statistics and genomics.

“Comparing distributions means mainly goodness-of-fit testing. … A lot of details are cited from the huge reference list, which I like very much. … At the end of the sections some practical guidelines are given which are very helpful. The monograph is of interest for applied statisticians as well as for research mathematicians. It contains a good overview of tests and methods. It can be recommended for advanced seminars on testing. … I can warmly recommend it.” (Arnold Janssen, Mathematical Reviews, Issue 2010 k)

“This outstanding book is about goodness of fit (GOF) testing … . In addition the book presents some graphical tools for comparing distributions with its focus on graphs that are closely related to statistical tests. … The book contains some theory with numerous examples that are useful for both applied statisticians and nonstatistician practitioners. … In conclusion this book provides considerable information for a wide range of Technometrics readers and it is a valuable contribution to our profession.” (Subir Ghosh, Technometrics, Vol. 53 (1), February, 2011)