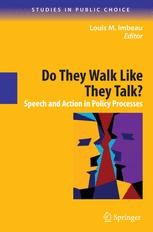 George Bush’s 1988 campaign pledge, "Read my lips: no new taxes," has become a mantra for those who distrust politicians and bureaucrats. The gulf between what political leaders say and do seems to be widening, and in democratic societies around the world, contributing to an atmosphere of cynicism and apathy among the citizenry. Understanding the characteristics and functions of speech in policy processes is a requirement for trying to overcome this problem. However, there has been scant analysis of political discourse; the aim of this book is to help fill this analytical gap, by exploring political speech from a variety of perspectives, including normative, epistemological, and empirical. Incorporating insights from economics, political science, philosophy, and law, and evidence from the United States, Canada, France, Italy, Turkey, and the EU, the book addresses a wide variety of timely issues, including:

Other questions explored include: Should policy makers always tell the truth and all the truth? What are the benefits and the costs of transparency? How can we resolve the apparent contradiction between the democratic demand for transparency and the efficiency requirement of secrecy in many policy areas? Under which conditions is secrecy acceptable in a democratic society? To what extent may deception and lies lead to a breach of trust or to power abuse? What are the most efficient institutional mechanisms to prevent such abuse? Collectively, the authors present new insights for understanding political process and government activity, and suggest avenues for further research.