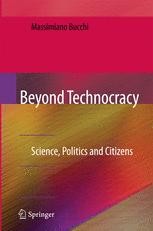 About this book
Nuclear energy, stem cell technology, GMOs: the more science advances, the more society seems to resist. But are we really watching a death struggle between opposing forces, as so many would have it? Can today’s complex technical policy decisions coincide with the needs of a participatory democracy? Are the two sides even equipped to talk to each other?

Beyond Technocracy: Science, Politics and Citizens answers these questions with clarity and vision. Drawing upon a broad range of data and events from the United States and Europe, and noting the blurring of the expert/lay divide in the knowledge base, the book argues that these conflicts should not be dismissed as episodic, or the outbursts of irrationality and ignorance, but recognized as a critical opportunity to discuss the future in which we want to live. Massimiano Bucchi’s analysis covers the complex realities of post-academic science as he:

Beyond Technocracy: Science, Politics and Citizens has great value as a postgraduate text for courses in technology and society, political science, and science policy. It will also find an interested audience among scientists, policymakers, managers in the technological sector, and concerned lay readers.

Praise for Beyond Technocracy

"Bucchi provides a clear, rigorous and accessible discussion – often enriched by a subtle irony – of complex and ambiguous issues, showing that science and innovation are not neutral terrains, but rather among the key conflictual contexts in which contemporary social and political changes take place."

"In his brilliant new book, Beyond Technocracy: Science, Politics and Citizens, Massimiano Bucchi opens for the reader the Pandora’s box of the complex relationship between scientists and citizens in contemporary, democratic societies...Based on a wealth of empirical evidence and case studies, the book is extremely accessible and well written, making it an ideal introduction to the issues. I would highly recommend it to specialists and non-specialists alike!"

"A dense but accessible book...Bucchi acutely describes the shortcomings of the technocratic and ethical responses to the contemporary dilemmas of science and technology."

-Italian Edition of the New York Review of Books

Massimiano Bucchi (Ph.D. Social and Political Science, European University Institute, 1997) is Associate Professor of Sociology of Science at the University of Trento, Italy. He has published five books, including Science and the media (London and New York, Routledge, 1998) and Science in society. An Introduction to Social Studies of Science (London and New York, Routledge, 2004) and several essays in international journals such as Nature, Science, History and Philosophy of the Life Sciences, New Genetics and Society, and Public Understanding of Science. He is a member of the International Scientific Committee for Public Communication of Science and Technology (PCST), and has served as advisor and evaluator for several research and policy bodies, including the Royal Society, US National Science Foundation and the European Commission. He has carried out research and given seminars at several international institutions, such as the Royal Society, Universität Bielefeld, ETH Zurich, London School of Economics, University of California Berkeley, Royal Swedish Academy of Sciences, University of Tokyo, Museu da Vida Rio de Janeiro, Austrian Academy of the Sciences and received several recognitions for his work, including the Mullins Prize awarded by the Society for Social Studies of Science (1997) and the Lelli prize for the best dissertation in sociology (1998).