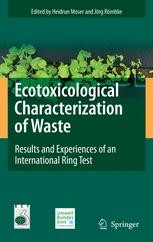 Results and Experiences of an International Ring Test

This book provides the background, organisation, methods, results and recommendations regarding the ecotoxicological classification and assessment of waste. Waste must be characterised, according to the European Waste list, as ecotoxicologically hazardous or non-hazardous. Despite being in force since 2000 no methodological recommendations have been provided to address the hazard criterion (H14 "ecotoxicity") which was taken over from the legislation on dangerous substances. Based on the recommendations of CEN guideline 14735 (2005), an international ring test was co-organised by the German Federal Environment Agency and ECT Oekotoxikologie GmbH. This book provides an overview of the experience as well as a comparison of the ring test results with the literature and data that has been published to date.

In total, 60 laboratories from 15 countries participated in the ring test. Tests were performed with three representative waste types: an ash from an incineration plant mainly contaminated with heavy metals, a soil containing high concentrations of organic contaminants (PAHs) and a preserved wood waste contaminated with copper and other heavy metals.

Information is provided on the basic test battery used in the ring test, consisting of three aquatic (Algae test, Daphnia acute test and Microtox test) and two terrestrial (earthworm acute and plant test with two species) tests, which cover all three waste types. In addition, data is presented for ten additional tests:  five aquatic (including a genotoxicity test) and five terrestrial.  Most tests were performed according to ISO guidelines, providing EC50 values as a measurement of toxicity. Data evaluation was done following recent recommendations made by ISO (2002) and Environment Canada (2005).

The results of the ring testing support the proposals made in the CEN guideline 14735 (2005) concerning the performance of such tests. This book also supplies a comprehensive list of references for further studies as well as the addresses of the ring test partners, among other useful information.