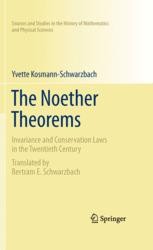 Invariance and Conservation Laws in the Twentieth Century

In 1915 Emmy Noether was invited by Klein and Hilbert to Göttingen to assist them in understanding the law of conservation of energy in Einstein’s new general theory of relativity. She succeeded brilliantly. In the Invariante Variationsprobleme, published in 1918, she proved a fundamental theorem linking invariance properties and conservation laws in any theory formulated in terms of a variational principle, and she stated a second theorem which put a conjecture of Hilbert in perspective and furnished a proof of a much more general result.

This book makes the Invariante Variationsprobleme accessible in an English translation. It presents an analysis of the work of Noether’s precursors, reformulates her argument in a more modern mathematical language, and recounts the strange history of the article’s reception in the mathematics and physics communities. This study shows how her two theorems ultimately became the basis for any deep understanding of the role of symmetries in both classical and quantum physics. The Noether Theorems, a translation of Les Théorèmes de Noether whose French text has been revised and expanded, provides rich documentation drawn from both primary and secondary sources.

This book will be of interest to historians of science, to teachers of mathematics, mechanics and physics, and to mathematicians and mathematical physicists. Also by Yvette Kosmann-Schwarzbach: Groups and Symmetries: From Finite Groups to Lie Groups, © 2010 Springer, ISBN: 978-0-387-78865-4.

"...to sum up The Noether Theorems in its own terms, it is an important study of the work of Emmy Noether, the evolution of ideas about conservation and symmetry, and the extraordinatry fertility of mathematical language."

"All in all, Kosmann-Schwarzbach’s book is a valuable and important contribution to the historical and mathematical literature—well worth owning to savor and reference... Kosmann-Schwarzbach’s masterful historical and mathematical study is a most welcome addition to the literature, furnishing new insight into the sociology and curious history of twentieth century science and mathematics, supplying a deeper appreciation of Noether’s profound genius, and providing an invaluable resource for clearing up misconceptions and misreadings of Noether’s wonderful theorems."

"The main part of  Kosmann-Schwarzbach's book, which is the improved English version of the second French edition of 2006... is devoted to a subtle analysis of the multi-faceted reasons why Noether's work was received rather selectively and slowly through the course of the 20th century...As a noted  differential geometer and as a woman, the author, Yvette Kosmann-Schwarzbach, who has been working on Emmy Noether's contribution for decades, is ideally suited to give a very nuanced analysis. In particular, the Kosmann-Schwarzbach book, which is both scientifically and historically most competent, traces 'genuine generalizations' of Noether's work in recent decades. This is a major event in the historiography of mathematics and physics of the 20th century."

“This book is positively brimming with the kind of arcane that appeals irresistibly to both historians of mathematics (and theoretical physics) and mathematicians proper who have parochial interest in the lives and adventures of titans of the past…Kosmann-Schwarzbach’s ‘The Noether Theorems’ is a wonderful scholarly contribution to the history of modern mathematics as it interacts with modern physics, and a very evocative account of the roles played by a number of major figures in early twentieth century German science.”

“The book under review does a splendid job in collecting and carefully presenting a huge range of material on the strange story of the belated reception of Emmy Noether’s symmetry investigations in variational problems and their further development…this book presents a highly interesting case study of an important mathematical development of the last century.”

“This book by Kosmann-Schwarzbach (École Polytechnique, France) focuses on two theorems and their converses as published by Emmy Noether in 1918. These results established a link between variational problem conservation laws and symmetries. The book is divided into two parts. … includes necessary background material as well as a discussion of extensions to Noether’s paper in the last 40 years. … concludes with a list of about 400 references. Summing Up: Recommended. Graduate students, researchers/faculty, and professionals.”

“Although a plenty of articles and books on Noether’s life and work have been published, curiously nowhere this fundamental paper found the appropriate attention. … With this monograph, which has been published originally in French in 2006, Kosmann-Schwarzbach fills that gap. After the translation of Noether’s paper she explains thoroughly its contents. Then a detailed analysis of the inception and reception of Noether’s ideas follows. … This is history of mathematics at its very best!”

“The author analyzes the most modern reformulations of Noether’s theorems and their generalization to a great number of problems. The book includes appendices which contain diverse correspondence between Noether and other scientists such as Klein, Einstein and Pauli, and an extensive and fairly complete list of bibliographic references. … this is a very good work on the Noether theorems and their influence in physics and mathematics, both from a historical and an expository point of view.”