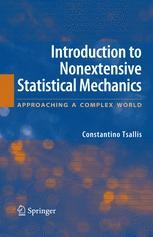 This book focuses on nonextensive statistical mechanics, a current generalization of Boltzmann-Gibbs (BG) statistical mechanics, one of the greatest monuments of contemporary physics. Conceived more than 130 years ago by Maxwell, Boltzmann and Gibbs, the BG theory exhibits many impressive successes in physics, chemistry, mathematics, and computational sciences. Presently, several thousands of publications by scientists around the world have been dedicated to its nonextensive generalization. A variety of applications have emerged in complex systems and its mathematical grounding is by now well advanced. A pedagogical introduction to its concepts – nonlinear dynamics, extensivity of the nonadditive entropy, global correlations, and extensions of the standard central limit theorems, among others – is presented in this book, as well as a selection of paradigmatic applications in various sciences and diversified experimental verifications of some of its predictions.

Introduction to Nonextensive Statistical Mechanics is suitable for students and researchers with an interest in complex systems and statistical physics.

Born in Athens-Greece, grew up in Argentina, Docteur d’ Etat from the University of Paris, established in Brazil since 1975, where he acquired the Brazilian citizenship. Many of the most recent theoretical results have, as co-author, Murray Gell-Mann, Nobel Laureate in Physics for his discovery of quarks. The author has recently done a two-year-long visit as researcher at the Santa Fe Institute, New Mexico.

Introduction to Nonextensive Statistical Mechanics (Approaching a complex World), by Constantino Tsallis, is an appealing introduction to a wide variety of exciting subjects, some of them often seen in undergraduate or beginning graduate courses, and others that would deserve to be so taught and maybe will, after this book begins to circulate. It is of the essence to point out that all topics in a book that covers a wide panoply of matters are discussed from a quite original and fascinating viewpoint. Such new perspective was initially generated by the author himself, followed by a close circle of authors. However, it has to be emphasized that this circle has been growing at a rapid pace, encompassing now about two thousand authors from 64 countries and near 3000 refereed papers in print.

Accordingly, the central idea of the book is to explore, describe, and detail, in didactic fashion, the surprising consequences of looking in a novel fashion at the manifold faces of one of the most fundamental concepts of science, that of entropy. More specifically, of entropy as expressed microsocopically in terms of underlying probability-sets that represent our knowledge about the system under scrutiny. How? Well, the answer lies in the paramount book’s feature: to look at things through the lens of a generalized functional form that is not the customary logarithmic one of Gibbs-Shannon, although reduces itself to it in an appropriate limit. Thereby, a whole new, beautiful and complex world of possibilities immediately opens up, both in Physics and in other scientific disciplines as well. We are talking about problems that can be adequately tackled via this new "optics", but that remains unassailable if imagination is unduly constrained to the tenets of the traditional logarithmic entropic functional. Simply said but true enough!

One of the monumental innovations in twentieth century physics is Jaynes’ original information theoretic approach to statistical mechanics, that provides today its orthodox foundation. It enters the picture in a most significant manner in this text. According to Jaynes, the basic probability distributions over microstates are obtained as distributions of maximum entropy (MaxEnt). This Jaynes-conception receives, via nonextensivity, the hard core of the text, a tremendous boost. If the concomitant entropic measure becomes now the non-logarithmic Tsallis’s one instead of merely Shannons’s, useful applications immediately multiply seemingly endlessly. Why? Simply because the former is characterized by a real parameter q, equal to unity in the orthodox Gibbs-scenario. It just happens that many natural phenomena in biology, chemistry, social sciences and physics simply respond well via MaxEnt to a q-value different from one. We understand now as a plain fact that natural and social phenomena themselves "choose", on their own and unaided accord, their appropriate q-value, not the (possibly prejudiced) observer. One interesting feature deserving explicit mention refers to the result that the generalized q-entropy is maximized by a generalization of the ordinary exponential, called nowadays the ``q-exponential". During the last 20 years these new q-functions have been discovered to appear everywhere, in all classes of natural and social stages.

The book consists of four different parts. The first one deals with the basics, the historical background, and physical motivations, all of them very interesting materials for an introductory course. In the second part, the book tackles the always difficult question of the foundations. Here, of course, those of the new viewpoint referred to in the first paragraph. These are deep waters indeed, well adapted to an advanced series of lectures. The third part of the text is devoted to a multtitude of applications of the theory. Here things get really exciting and enjoyable. Physics, Astrophysics, Geophysics, Chemistry, Economics, Computer Sciences, Biosciences, Linguistics and other sciences provide beautiful and instructive illustrations concerning the power of the new nonextensive concepts. Finally, somewhat philosophical matters are the subject of the fourth and last part of the book, in which questions that still remain open are also dealt with.

The text is mostly self-contained. The author is obviously well versed in both teaching and writing in general and, obviously, in the book’s subjects, on which he has personally worked very hard and achieved so much. The presentation is lucid, clear and easy to follow. The very many Tsallis’ practitioners will certainly enjoy reading the book. For those not familiar with the materials under revision, a new universe will open up. I can hardly conceive of a science-oriented mind not being motivated to try his/her hand at some of the topics here covered, after perusing some of the many and fascinating examples discussed in the text.

Boltzmann opened up humanity’s collective mind, in the second half of the nineteenth century, to the wonders of the probabilistic microscopic description of the world. We see now, after 20 years and about 3000 papers, that his vision has been both expanded and complemented by the nonextensive generalization of of the Vienese pioneering ideas. As Hamlet famously remarked to Horatio, there are more things on heaven and earth that any philosophy may encompass. A few of them can be found in this delightful book, and for sure, there is much more to come. But that is the wonder of science. (Prof. Dr. A. Plastino, Instituto de Fisica de la Plata (IFLP), August 2009)

“It is an impressive text by the founder (C. Tsallis), on the origin and usage of non-additive entropies in a wide range of physical phenomena and physics-inspired models, going far beyond the traditional scope of statistical mechanics. … The text has an important visual input, a large number of figures that enhance the author’s main message that his inventions allow to deepen our understanding of a complex world.” (Piotr Garbaczewski, Zentralblatt MATH, Vol. 1172, 2009)

“Nonextensive statistical mechanics attempts to enlarge the domain of applicability of the framework of the standard Boltzmann-Gibbs theory by generalizing the entropic functional, which connects the probabilities of the microscopic possibilities with some of its macroscopic manifestations. The present theory is continuously evolving and new insights are emerging that afford a deeper understanding of its nature, power, and limitations.” (Aurelian Isar, Mathematical Reviews, Issue 2012 b)