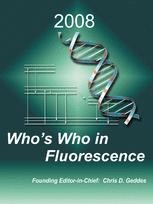 Who's Who in Fluorescence 2008

The Institute of Fluorescence features two main laboratories, which underpin Dr. Geddes’s research aspirations, namely; The Laboratory of Advanced Medical Plasmonics and the Laboratory for Advanced Fluorescence Spectroscopy. Both laboratories are poised to advanced our knowledge of fluorescence / plasmonics and their applications. Current research is based on developing a fundamental understanding of metal-enhanced fluorescence, a term introduced by Dr. Geddes in 2002, with outcomes focused at developing a unified plasmon-fluorophore description. Other research involves developing microwave based plasmonic devices for ultra fast and ultra sensitive sensing platforms, such as for the detection of bio-warfare and clinical agents, e.g. Anthrax and Cardiac Markers. http://theinstituteoffluorescence.com/

About the Who's Who in Fluorescence Annual Volume

The Who’s Who in Fluorescence Annual Volume was founded by Dr. Chris D. Geddes, Professor and Director of the Institute of Fluorescence at the University of Maryland Biotechnology Institute, Baltimore, Maryland USA, in 2003. The Who’s Who in Fluorescence is a comprehensive directory of workers from Industry, Governments and Academia alike, who employ Fluorescence methodologies in their everyday working lives. The invitation-only volume features a brief description of a contributor’s specialty or research, keyword listings, contact details and representative publications. A "Companies in Fluorescence" section can also be found at the back of the volume and features company adverts, product information and contact details. The origins of the volume can be traced back to Professor Geddes adopting the editorialship of the Journal of Fluorescence in 2001. At that time, the Journal of Fluorescence was still taking paper-based manuscript submissions, with editorial decisions sent via paper mail or e-mail. In the absence of any global directory of fluorescence expertise, workers and company details for peer-review purposes, Dr. Geddes created simple spreadsheets with workers details and fluorescence specialty keyword listings etc. In late 2002 it was thought that other workers in fluorescence might also benefit from a global listing. Subsequently, the first volume was published by Kluwer Academic / Plenum Press in January 2003. The first volume featured some 312 fluorescence workers from around the world. Today, the volume now published by Springer, has established itself in the fluorescence community as the key directory for fluorescence workers worldwide, with thousands of copies disseminated annually at conferences, through internet book stores and by the Institute of Fluorescence, home to the Who’s Who in Fluorescence Annual Volume. http://wwifonline.com/

"Who’s Who in Fluorescence 2008 is a guide to scientists and workers in the academic, industrial and government sectors who employ fluorescence in their work, as well as to companies that are involved in fluorescence. The 232-page invitation-only volume includes the names, addresses, contact details, and professional interests and specialties of more than 400 contributors from more than 35 countries. Specialty keywords, representative publications and author impact measure numbers are included." (Biophotonics International, August, 2008)