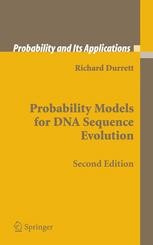 How is genetic variability shaped by natural selection, demographic factors, and random genetic drift? To approach this question, we introduce and analyze a number of probability models beginning with the basics, and ending at the frontiers of current research. Throughout the book, the theory is developed in close connection with examples from the biology literature that illustrate the use of these results. Along the way, there are many numerical examples and graphs to illustrate the conclusions.

This is the second edition and is twice the size of the first one. The material on recombination and the stepping stone model have been greatly expanded, there are many results form the last five years, and two new chapters on diffusion processes develop that viewpoint. This book is written for mathematicians and for biologists alike. No previous knowledge of concepts from biology is assumed, and only a basic knowledge of probability, including some familiarity with Markov chains and Poisson processes. The book has been restructured into a large number of subsections and written in a theorem-proof style, to more clearly highlight the main results and allow readers to find the results they need and to skip the proofs if they desire.

Rick Durrett received his Ph.D. in operations research from Stanford University in 1976. He taught in the UCLA mathematics department before coming to Cornell in 1985. He is the author of eight books and 160 research papers, most of which concern the use of probability models in genetics and ecology. He is the academic father of 39 Ph.D. students and was recently elected to the National Academy of Sciences.

Rick Durrett received his Ph.D. in operations research from Stanford University in 1976. He taught in the UCLA mathematics department before coming to Cornell in 1985. He is the author of six books and 125 research papers, and is the academic father of more than 30 Ph.D. students. His current interests are the use of probability models in genetics and ecology, and decreasing the mean and variance of his golf.

This book serves as an introduction to, and a compilation of, results in the new and growing field of probability theory for DNA evolution. The author is a probabilist, but he has made an effort to appeal to biologists and mathematicians alike. Biologists will find in this book those methods used for studying DNA variability that go beyond straightforward applications of statistics and require genuine mathematical insight into the underlying mechanisms. The example data are real and the driving motivation is to understand these truthfully. Mathematicians will find in this book not an attempt to develop some abstract theory, but rather a kaleidoscopic collection of ideas and methods invented to attack a common problem. The emphasis is on catching the main ideas in down-to-earth calculations; continuum models and more sophisticated methods from analysis are avoided. The book starts with the Wright-Fisher model for neutral selection in a constant population, and then builds and varies on this in Chapters 1--3 by adding the effects of mutation, recombination, selection, nonconstant population sizes and spatial structure. Chapter 4 is devoted to statistical tests for detecting departures from the neutral model and Chapter 5 discusses the large-scale structure of the DNA such as the size and number of chromosomes, inversions, translocations and duplications. This book will serve as a useful guide to this new and exciting field and an inspiration even for the more experienced readers.--Mathematical Reviews

"With numerous interspersed example datasets from the primary literature, this book offers a brief introduction to models of both long-term and short-term DNA sequence evolution, with emphasis on the latter…Diverse audiences will find much of the value in this concise book. The author’s rigor and ability to embed material in a broader mathematical context will appeal to quantitative readers with little background in biology…The book’s strength is in its mathematical content, which revives almost-forgotten theorems, includes new proofs, and is thorough but not overwhelmingly detailed or overburdened with notation."Journal of the American Statistical Association, June 2004

"This book may be considered as a monograph on probability modeling DNA sequence evolution. It also can be considered as reference book fro researchers in the theme. … The book introduces the particularities of the modeling for special an important families of problems arising in the study of DNA. … it is good book for mathematicians, biologists, physics, engineers and other scientists involved with the study of DNA problems." (Chou-la kain, Revista Investigación Operacional, Vol. 30 (2), 2009)

"The highly acclaimed book … by Richard Durrett also continues to be successful in the second edition. The book discusses probability models for population genetics focusing on analytical results and their proofs. … A number of numerical examples and graphs are given to aid the reader’s comprehension. … The book can be highly recommended to all graduate students and researchers involved in interdisciplinary work in the field of mathematics and biology who are interested in genetics and evolution from a mathematical point of view." (Manuel Dehnert, Biometrical Journal, Vol. 51 (3), 2009)

"This is the second edition of the author’s book … . One of its main aims is to build a bridge between biologists on the one hand, and mathematicians … on the other hand. … this edition has expanded a lot, almost doubling in size. This is mainly due to the fact that a lot of material has been added. … One of the strong points of the book is that it is an excellent guide to the literature, collecting over 400 references … ." (Jan M. Swart, Mathematical Reviews, Issue 2009 k)

“The previous edition of this book was published in 2002 and reviewed in Biometrics 59, 206. The reviewer, David Balding, concluded that ‘Both the mathematician looking for an introduction to applications in genetics, and the biologist needing more insight into the mathematical foundations of population genetics and evolution, will find much of interest here.’ Those people will find even more of interest in this new edition, which is about 75% larger than the original. The expansion incorporates both an increase in the range of topics covered and an update in light of recent work.”  (Biometrics, Summer 2009, 65, 1000)

“This book would be appropriate for advanced graduate students in probability and mathematical statistics with interests in genetics. … the goal of the book is to present ‘useful analytic results in population genetics, together with their proofs.’ … The literature review is excellent and it is intertwined with the text. … The book is up-to-date as evidenced by the references. … For statisticians or probability specialists … this book is excellent. … In conclusion, I highly recommend the book.” (Myron Hlynka, Technometrics, Vol. 51 (4), November, 2009)