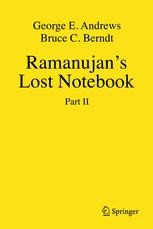 This volume is the second of approximately four volumes that the authors plan to write on Ramanujan’s lost notebook, which is broadly interpreted to include all material published in The Lost Notebook and Other Unpublished Papers in 1988.

About Ramanujan's Lost Notebook, Volume I:

"Andrews and Berndt are to be congratulated on the job they are doing. This is the first step...on the way to an understanding of the work of the genius Ramanujan. It should act as an inspiration to future generations of mathematicians to tackle a job that will never be complete."

- Gazette of the Australian Mathematical Society

"...the results are organized topically with cross-references to the identities as they appear in the original Ramanujan manuscript. Particularly helpful are the extensive references, indicating where in the literature these results have been proven or independently discovered as well as where and how they have been used."

- Bulletin of the American Mathematical Society

"The mathematics community owes a huge debt of gratitude to Andrews and Berndt for undertaking the monumental task of producing a coherent presentation along with complete proofs of the chaotically written mathematical thoughts of Ramanujan during the last year of his life. Some 85 years after his death, beautiful "new" and useful results of Ramanujan continue to be brought to light."