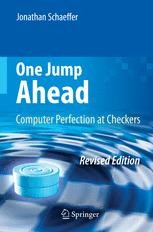 The new edition of this extraordinary book depicts the creation of the world champion checkers computer program, Chinook. In only two years, Chinook had become a worthy opponent to the world champion, and within four years had defeated all the world's top human players. Jonathan Schaeffer, the originator and leader of the Chinook team, details the mistakes and technical problems made and the lessons learned in the continuous effort to improve Chinook's performance, revealing the human factor behind the program’s design. The development of Chinook begins in 1988 as an innocent question asked over lunch and is followed to the final match against then world champion, Marion Tinsley, and ultimately to its recent triumph, solving checkers. Schaeffer’s unwaveringly honest narrative features new anecdotes, updated material and technology descriptions, and additional photos and figures, providing an engrossing account of an obsessive quest to achieve perfection in computer checkers.

Jonathan Schaeffer is a professor of Computing Science at the University of Alberta. His research interests are in artificial intelligence, and he is well known for using games to demonstrate his ideas. He has achieved success building high-performance programs for chess, checkers and poker. Today, most of his research effort is devoted to addressing the challenging problems of the commercial games industry.

"In his unique voice, Jonathan Schaeffer describes the ups and downs of a research project where the ultimate goal is perfection.  And Schaeffer is brutally honest about his failures to live up to this standard. When he finally succeeds at his eighteen-year quest, the reader can't help but share the emotions of the moment."

The scientists who developed Chinook rigorously proved that Chinook can never lose, i.e. computer checkers has been solved.  Author Schaeffer detailed the process on the web site of the journal Science in July 2007, and the story has since been reported in the Chicago Tribune, The New York Times, USA Today, Discover Magazine, as well as on MSNBC and CNN, among others.