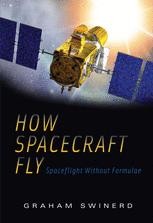 About half a century ago a small satellite, Sputnik 1, was launched. The satellite did very little other than to transmit a radio signal to announce its presence in orbit. However, this humble beginning heralded the dawn of the Space Age. Today literally thousands of robotic spacecraft have been launched, many of which have flown to far-flung regions of the Solar System carrying with them the human spirit of scientific discovery and exploration. Numerous other satellites have been launched in orbit around the Earth providing services that support our technological society on the ground.

How Spacecraft Fly: Spaceflight Without Formulae by Graham Swinerd focuses on how these spacecraft work. The book opens with a historical perspective of how we have come to understand our Solar System and the Universe. It then progresses through orbital flight, rocket science, the hostile environment within which spacecraft operate, and how they are designed. The concluding chapters give a glimpse of what the 21st century may hold in terms of human exploration of the Solar System and more futuristic propulsion technologies for interstellar travel.

Graham Swinerd invites you to understand "how spacecraft fly," while becoming a convincing rocket scientist along the way!

Graham Swinerd has over thirty years of experience in spacecraft orbit design and analysis and in the design of spacecraft. He also has many years of experience as an engineer, both in industry, working for a number of years at British Aerospace Space Systems, and as a lecturer of spacecraft engineering at Southampton University, supervising project undergraduate and postgraduate research students. He has some 60 technical papers published in refereed journals, and numerous conference papers. He is also principal editor, and contributing author, of an award winning standard textbook in spacecraft design - 'Spacecraft Systems Engineering (3rd Edition)', Fortescue, Stark and Swinerd, Wiley & Sons, 2003. Graham Swinerd is therefore ideally suited to author a book on the subject of the design and operation of spacecraft.

"Fortunately Graham Swinerd, reader in astronautics at the University of Southampton, has penned... a maths-free guidebook... if only all popular science books were as clearly presented!" (Four out of five stars, Sean Blair, Sky at Night Magazine, May 2009)

"There is a great deal of useful information that you do not find readily elsewhere and given the rather dry nature of the subject, the book is written in a lucid and engaging style that makes enjoyable reading..." (Robin Flegg, Astronomy Now, May 2009)

"Aimed at non-technical readers, the book requires ‘no prior knowledge’. … The core of the book includes discussion of the various spacecraft subsystems, such as power, propulsion and communications, and a commentary on design. … The book makes reference to ‘Star Trek’, warp drive and the space elevator, but only by way of populist garnish." (Mark Williamson, IET Knowledge Network, May, 2009)

"This work is a basic introduction to spacecraft (mainly satellite) engineering … . The material in this volume should be accessible to any undergraduate who has taken introductory courses in math and physics. … This work is so fundamental and relevant to the modern world that it will be important for all libraries serving undergraduates. Summing Up: Highly recommended. General readers, lower- and upper-division undergraduates, graduate students, and two-year technical program students." (A. M. Strauss, Choice, Vol. 46 (8), April, 2009)

"The book concentrates on fundamental topics such as types of orbits, forces influencing orbits … and the multitude of systems and subsystems associated with spacecraft design. … This is certainly an interesting and highly readable volume which offers one of the best introductions to spacecraft engineering … . In conclusion, the author expresses the hope ‘that this book will play a … part in inspiring young people to get involved in space science and engineering’ — a hope that I heartily endorse." (Peter Bond, The Observatory, Vol. 129 (1212), October, 2009)

“The challenge of making rocketry and spaceflight understandable to the layman is … addressed by Professor Swinerd in this new and attractively produced book. … Written in a friendly style and extensively illustrated with images and graphics the book is well structured and indexed. … For the non specialist, as well as the non technical, this is a novel and interesting starting point for an armchair journey into space.” (Pat Norris, The Aeronautical Journal, July, 2009)