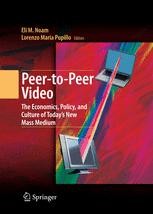 The Economics, Policy, and Culture of Today's New Mass Medium

Peer-to-Peer (P2P) is a communication structure in which individuals interact directly, without going through a centralized system. The implications of this architecture go far beyond the technological realm; the ability of individuals to share digital content files, including audio and video material, in real time, facilitates communication and, at a deeper cultural level, promotes community without hierarchy or strict control. As Eli Noam, Lorenzo Pupillo, and their colleagues demonstrate in this timely and incisive volume, P2P has permeated all facets of society, from YouTube and music downloading experiments on college campuses to international policy debates over intellectual property rights. Peer-to-Peer Video is the first book to apply economic principles to analyze and understand the P2P phenomenon, considering such topics as "consumer demand and the commons" and "file sharing and the copyright crisis." Moreover, the authors, who include scholars, consultants, and industry executives, provide numerous contemporary examples from the U.S. and around the world to shed light on P2P as a mass medium, exploring such issues as pricing, licensing, security, and regulation. The result is provocative commentary on a slice of popular culture that will interest scholars and students, policymakers, media industry professionals, and general readers alike.

Dr. Eli Noam is Professor of Finance and Economics at the Columbia University Graduate School of Business and Director of the Columbia Institute for Tele-Information. He has also served as Public Service Commissioner for New York State, engaged in telecommunications and energy regulation. His publications include over 25 books and 300 articles on domestic and international telecommunications, television, Internet, and regulation subjects. His books include Mobile Media: Content and Services for Wireless Communications (co-ed., Erlbaum, 2006), Interconnecting the Network of Networks (MIT Press, 2001), and The New Investment Theory of Real Options and Its Implication for Telecommunications Economics (co-ed., Springer, 1999); his articles have appeared in such journals as the Quarterly Journal of Economics, National Tax Journal, Journal of Industrial Economics, Public Choice, and Law and Policy Quarterly. He has served as a board member for the federal government's FTS-2000 telephone network, the IRS' computer modernization project, and the National Computer Lab.

Dr. Lorenzo Maria Pupillo is an Executive Director in Telecom Italia and Affiliated Researcher at Columbia Institute for Tele-Information. At Telecom Italia, he is in charge of Economics of Public Strategies. He is an economist by training and has worked in many areas of telecommunications demand and regulatory analysis, publishing papers in applied econometrics and industrial organization. He has also been Advisor to the Global Information and Communication Technologies Department of the World Bank in Washington, and Adjunct Professor of Economics of ICTs at University of Rome, La Sapienza. Before joining Telecom Italia in 1992, he was member of the technical staff at AT&T Bell Laboratories in Murray Hill, New Jersey.