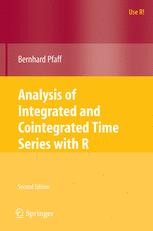 Analysis of Integrated and Cointegrated Time Series with R

The analysis of integrated and co-integrated time series can be considered as the main methodology employed in applied econometrics. This book not only introduces the reader to this topic but enables him to conduct the various unit root tests and co-integration methods on his own by utilizing the free statistical programming environment R. The book encompasses seasonal unit roots, fractional integration, coping with structural breaks, and multivariate time series models. The book is enriched by numerous programming examples to artificial and real data so that it is ideally suited as an accompanying text book to computer lab classes.

The second edition adds a discussion of vector auto-regressive, structural vector auto-regressive, and structural vector error-correction models. To analyze the interactions between the investigated variables, further impulse response function and forecast error variance decompositions are introduced as well as forecasting. The author explains how these model types relate to each other.

"Analysis of Integrated and Cointegrated Time Series with R (2nd Edition) … offers a rigorous introduction to unit roots and cointegration, along with numerous examples in R to illustrate the various methods. The book, now in its second edition, provides an overview of this active area of research in time series econometrics. It manages to be thorough (using formal notation), yet remains applied in its focus.… The second edition also adds new material on VAR and SVAR models which strengthens the coverage of multivariate methods.… the book can clearly be recommended to both researchers and practitioners in time series econometrics." (Dirk Eddelbuettel, Journal of Statistical Software, Volume 30, Book Review 5, 2009-04-27)

"The writing is lucid and the book and software used can be recommended to its intended audience. The value of the book lies principally in showing how a number of packages including the author's own packages urca and vars may be used for modern econometric analysis." (David J. Scott, International Statistical Review, 77, 1, 2009)

"The book is divided into three parts. … This book addresses senior undergraduates, graduate students and practitioners in the field of econometrics. This is not a text in statistical theory, but does cover modern statistical methodology. It is particularly suited as an accompanying text in applied computer laboratory classes." (M. P. Moklyachuk, Mathematical Reviews, Issue 2009 k)

“The prominent feature of this book is that it demonstrates how rapidly different inference methods, diagnostic testing, impulse response analysis, forecast error variance decomposition, and forecasting can be implemented with R, which may interest many practitioners working in this arena. … the book is descriptive, some chapters are a combination of overviews and developments. This book has several programming examples that utilize both real and artificial data. The style and format of the edition is standard and it offers Name, Function and Subject indexes.” (Technometrics, Vol. 52 (1), February, 2010)